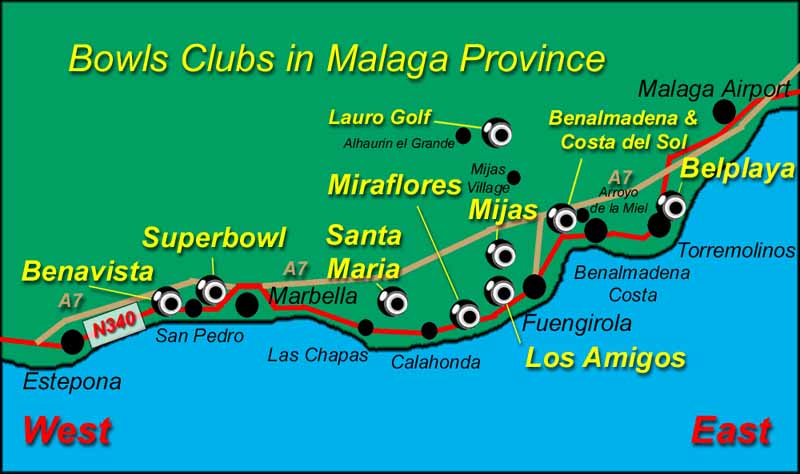 All the clubs are located near the N340, the main coast road, (except Lauro Golf & Pueblo Fiesta), and the following detailed directions all relate to this road. (Travelling to some clubs using the western sections of the A7 Costa del Sol toll road sections can save you time, but should be avoided unless you are very familiar with the area.) The clubs  listed below are sequenced east to west, but for each club details are given for both directions. Travelling from most parts of Spain you will probably enter the Malaga coast via the A7 motorway, circumnavigating Malaga city costa del sol bowling

Pass under the tunnel 1 KM from the A7 and take the last exit from the roundabout, (approaching a Supersol supermarket on your right). Take first exit from the roundabout with tall statue in the centre. Pass straight over roundabout with Burger King on the right, (9 KM from statue roundabout). After 7 KM filter right at the traffic light complex, with La Colina building on the left as you turn. Follow curvy one way road for 3 KM and then pass over roundabout. 0.5 KM from roundabout you will see a hotel with large RIU sign on top. This is Belplaya Hotel and the location of Belplaya BC.

Mijas BC
East-West: Continue on the A7, bypassing Torremolinos & Benalmadena Costa. Nearing Fuengirola, take the N340 right-hand fork, avoiding the A7 toll road left-hand fork.On the N340 at the 211KM sign, take the next exit leading to the Mijas Road on the right.     West-East: Travelling on the N340, bypassing Fuengirola, turn off at the Mijas sign, just before a road bridge. Turn left at the T-junction, crossing the road bridge over the N340 and bringing you to the Mijas road.

Follow the Mijas Road 0.8 KM until you reach the Peugeot Showroom. Turn left at the far end of the showroom and follow the road, bearing right until you see Mijas BC on your left.

Follow the the signs to the Miraflores Sports Centre.

Superbowl BC
East-West: Travelling from Fuengirola, the N340 bypasses the centre of Marbella, passing a McDonalds restaurant on your left. Next watch out for a major fork in the road, (where the A7 toll road leads off to Estepona). Take the N340 right fork through the tunnel. 3 KM from the tunnel you will pass the Corte Ingles department store on your left. Take the right exit, opposite the PYR Hotel, located next to the Corte Ingles. Immediately after you turn off, take the left fork, (otherwise you will find yourself the other side of the N340 in Puerto Banus!). You will come to a roundabout.     West-East: After travelling from the centre of San Pedro 3.3 KM, on the N340, take the right exit to Puerto Banus. Take the last exit from the roundabout which takes you via a tunnel to a roundabout on the other side of the N340.

Benavista BC
East-West: Follow the directions for Superbowl BC until you reach Corte Ingles department store. Travel to the centre of San Pedro on the N340 3.3 KM. Continue on the N340 1KM to the famous Marbella Arch. Pass the Benahavis turn off on you right.     West-East: Travelling on the N340 from Estepona in the direction of San Pedro, you will pass Benavista BC on your left at KM 167. About 1 KM take the Benhavis exit. Pass under the tunnel and take get back on to the N340 in the Estepona direction.