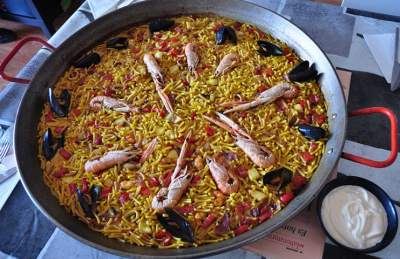 How to Make a VEGAN FIDEUÁ RECIPE | Spanish Noodle Paella Just click above and follow the recipe.

Omar Allibhoy shares his delicious recipe for Fideuà, essentially paella made with pasta instead of rice. Not only is this seafood dish delicious, but it’s also quick to make too. Get the recipe: http://thehappyfoodie.co.uk/recipes/f.

Enjoy the true taste of Spain and explore this fascinating country s love affair with paella and the deliciously diverse ways in which rice and noodles are used in a multitude of unmissable dishes.

Rice is a wonderfully versatile ingredient, and Spanish cooks transform it into an array of dishes from simple comfort food to grand feasts to be shared on special occasions. This book brings together delicious rice dishes from all over Spain, from regional classics that are enjoyed around the world to unusual local specialities. Also included are recipes for the lesser-known fideua, a dish originally from the coast of Valencia that is very similar to paella but made with snipped vermicelli noodles rather than rice. There is something for every taste here, with recipes containing meat, poultry, fish and shellfish, as well as some tempting vegetarian and vegan options to choose from. Learn how to make a show-stopping Paella Valenciana (Valencian paella) or a Paella de Marisco y Chorizo (Seafood paella with chorizo), or Fideua Negra (squid ink noodles) and how to make the most of tasty ingredients like garlic, saffron and smoked paprika in your cooking. As well as traditional regional dishes, there are also other styles of rice dishes to try, such as Arroz Caldoso con Almejas (Clam soup) or Arroz al Horno con Garbanzos y Pasas (Baked rice with chickpeas and raisins). Lovers of authentic Spanish food will not be disappointed!

Learn how to add noodles to a Spanish chicken noodle soup recipe in this free cooking class on video. Just click in.