Listings for your next holiday of Cantabria Campsites Santander. On the Costa Verde in Spain Cantabria is nestled in the centre of the northern coast of Spain, between Asturias and the Basque Region.

Camping Playa Joyel is set within the Noja Nature Reserve and has direct access to a sandy beach, on Cantabria’s Costa Verde.

It offers free parking and a wide range of facilities. More

Guests at Camping Playa Joyel can enjoy meals and snacks at the bar-café-pizzeria. Wi-Fi is available in the business centre for an additional charge.

Each bungalow at Playa Joyel comes with a covered porch and a garden area with table and chairs.

They all have a kitchen with a small fridge and a microwave and a living room with TV. There is a shower in the bathroom.

Each bungalow has a furnished porch. The living room comes with a TV and sofa. There is a private bathroom with a shower. The kitchenette includes a fridge, microwave and coffee maker.

The complex has a café and a supermarket. There is also a restaurant and a gift shop.

It features a seasonal outdoor swimming pool and country-style bungalows with verandahs. More

It offers accommodation with a private terrace and mountain views. More

The restaurant at La Barguilla offers traditional Cantabrian food accompanied by great views of the countryside. There is also a bar serving snacks and drinks throughout the day.

The campsite has a games room, and there is a children’s playground. Staff at reception can provide information about what to see and do in the surrounding area.

Camping La Barguilla is located close to the River Asón, where you can go canoeing. Bilbao is about 50 minutes’ drive away, and you can reach Santander’s Airport and Ferry Terminal in around 40 minutes.

Offering rooms with excellent views over La Arena Beach, Hotel Playa La Arena is at the entrance to a camp site.

It offers free parking and is a 30-minute drive from Santander. More

From rugged snow-capped mountains to long stretches of glorious sandy beaches and with lush pastures, wild rivers and extensive forestry in between, Cantabria in northern Spain has just about everything to offer the serious walker, casual rambler or holidaymaker in search of a gentle stroll.

This book brings together some of the highlights of the Cantabrian landscape by offering the reader an easy walking route – the walks range from one to eight kilometres – along with tips on what to look out for on the way be it a particularly stunning view, a point of historical interest or some of the abundant flora and fauna.

Come to Spain. Come to Cantabria.

Cantabria is a Spanish province and autonomous community with Santander as its capital city.

It is bordered on the east by the Basque Autonomous Community (province of Biscay), on the south by Castile and León (provinces of León, Palencia and Burgos), on the west by the Principality of Asturias, and on the north by the Cantabrian Sea.

Cantabria is the richest region in the world in archaeological sites from the Upper Paleolithic period.

The first signs of human occupation date from Lower Paleolithic, although this period is not so well represented in the region.

The most significant cave painting site is the cave of Altamira, dated from about 16,000 to 9000 BC and declared, with other nine Cantabrian caves, World Heritage Sites by UNESCO.

Spanish is the official language of Cantabria. The eastern part of Cantabria contributed to the language’s origins in a significant way.

Cantabrian language, or Mountain language, is hardly preserved in the West of Cantabria and some zones of the Pas Valley and the Valley of Soba, in its Eastern zone. This language has neither regulation nor official recognition.

Cantabria is part of Green Spain, (España Verde) named because of its lush pastures and mountainous forest covered landscape.

The area runs from Galicia in the east all the way along the northern coast of Spain to the French border in the west.

The coastal area is full of beaches, some relatively untouched, all with golden sands. Further inland Cantabria boasts two mountain ranges: the Cantabrian mountains to the south and the Picos de Europa to the west.

Despite its small size, there are seven natural areas of undoubtable interest in this autonomous community: 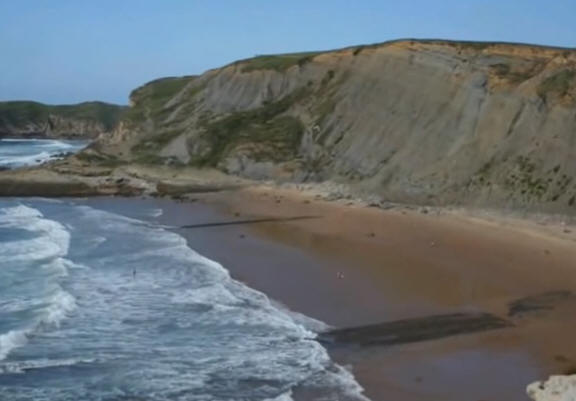