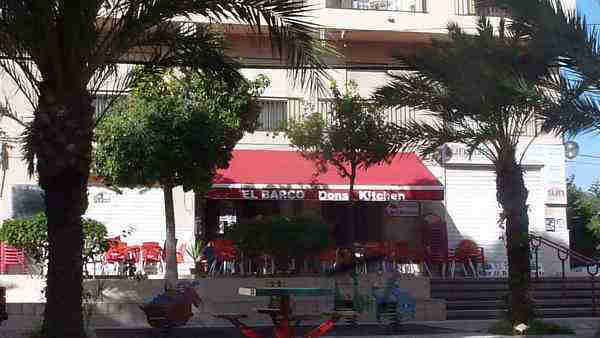 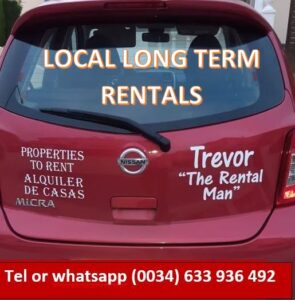 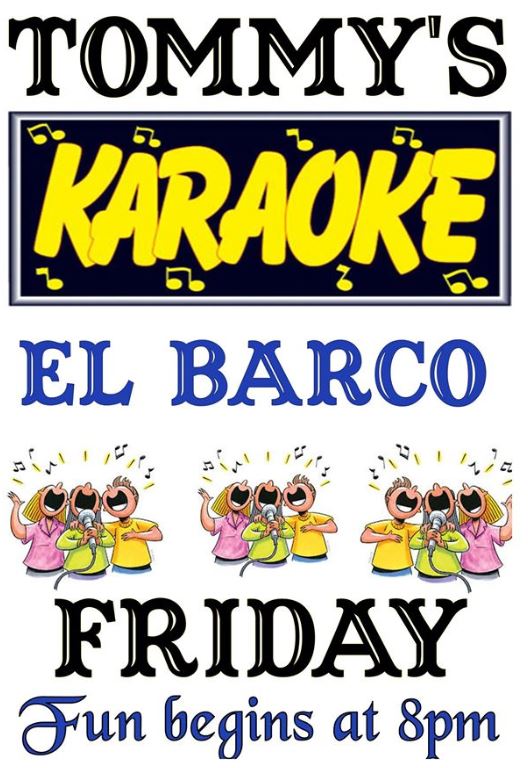 Tommy will be here every other Friday. Come early get a good seat.

El Barco, La Marina Village re opened and under New Management in December 2015. The bar is now owned by Shona and Derek who has worked in the catering trade for a number of years.

The setting of the restaurant is beautiful with the church nearby, so we see all the weddings, christenings etc… We also benefit from a small Childrens play area, and the Red Squirrels are always playing in the trees, so the atmosphere is really enjoyable and relaxing.

We do a traditional Sunday lunch  which we would advise booking. 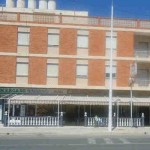 There is 1 person looking at this hotel.

Hotel Montemar is 3 minutes’ drive from the pine forest and dunes at La Marina Beach on the Costa Blanca, 25 km from Alicante Airport. It offers air-conditioned rooms with a private bathroom. More…

The Village boasts its own playa (beach which has received a Blue Flag award).

It is a very very long beach and has many sand dunes and is edged by a Pine Forest where the locals tend to have picnics.

The Campsite in La Marina Village
Very efficiently run by a friendly Belgian family, La Marina has 381 pitches of three different types and sizes ranging from 50 sq.m. to 150 sq.m. with electricity (16/25A), TV, water and drainage.

Artificial shade is provided and the pitches are extremely well maintained on the level, well drained ground with a special area allocated for tents in a small orchard.

The huge lagoon swimming pool complex is absolutely fabulous and has something for everyone (with lifeguards).

William Le Metayer, the owner, is passionate about La Marina and it shows in his search for perfection. A magnificent new, modern building which uses the latest architectural technology, houses many superb extra amenities. Member of Leading Campings Group. 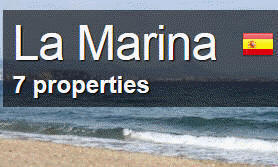 Click above for Discounted prices of Hotels in La Marina Spain.

La Marina Village and Playa can be found 27 km south of Alicante,just off the N332 at the bottom of the hill that leads up to La Marina Urbanisation only 20 minutes South of Alicante airport and its fabulous city.

The Village is a very popular area for all nationalities offering an abundance of facilities including bars, shops, restaurants, banks, solicitors, doctors, dentists, hairdressers, beauticians, a gym, vets, all types of tradesmen and lots more.

The beautiful blue flag long sandy beaches and protected pine forest/nature reserve of Village are much loved by the locals and visitors alike.

All major towns and cities are within easy reach with a good choice of prestigious golf courses easily accessible. For the ladies there are an abundance of shops and shopping centres in the major cities of Alicante and Elche

There is an abundance of wildlife close at hand with the Salinas de Santa Pola having one of the largest flocks of flamingos in Spain and the famous El Hondo nature reserve close by.
With mountains inland and salt lakes to either side the area has its own microclimate with little rain. The World Health Organisation recognises it as the healthiest place to live and stay in Europe.

No doubt, this fact played a part in La Marina recently being listed in the top 10 best emigration destinations by “Homes Overseas” magazine (July 2006 edition).

The Costa Blanca coastline is world famous for its excellent beaches and golfing facilities. However, there is so much more to do than just bask in the sunshine. This part of Spain has been occupied by many different peoples over the centuries, each leaving their own historical influences on the area.

As a result, the region is home to some stunning cultural landmarks: castles overlooking the sea; ancient villages; impressive cities, all built and added to by many conquering races.

There is also some stunning countryside, including the largest palm grove in Europe at nearby Elche.

So why not explore some of these treasures during your stay ? There are many places you could tick on a “must-see” list.

We would include among them Alicante itself (more than just an airport!), Torrevieja, Elche, Orihuela and – especially for the kids – Terra-Mitica.

Around 2hrs drive north along the AP-7 is the city of Valencia, the 3rd largest in Spain, and well worth a visit. However, the real “must-see” of the area has to be (in our opinion), the tiny village of Guadalest, inland from Benidorm. Carved out of the mountain, access to the village is through one very small and narrow entrance, for easy defence in times of emergency; a fascinating and truly unique example of local Spanish heritage.

As expected, there is an abundance of water sports available to try in the Torrevieja area. There are also marinas in Santa Pola,Torrevieja, Guardamar and Alicante.

For children there are 2 Aqua Parks found in nearby Quesada and Torrevieja, which also have a number of shops restaurants, bars, banks and the like to meet all your holiday requirements. There are many markets held in the local towns and villages, and the La Marina Market is held on Thursdays and Sunday,or a drive into Torreveija takes you to more sophisticated shopping.

For a completely different aspect, the hills which back onto the Costa Blanca offer some superb walking, especially further north towards Benidorm and Denia.

Due to the excellent Spanish motorway network, Valencia is only a couple of hours away, which is ideal as Formula 1 gears up for its second urban based circuit in Europe (Monaco being the first), to be held in Valencia in 2008.

The new circuit is based around the City of Arts and Sciences and the Marina area at Port Americas Cup. Surpassing Monaco and taking the lead as the new European Grand Prix, the race will be held on the 24th August 2008 around the Mediterranean port where developments for the circuit are well under way.
Costa Blanca Golf

There are several golf courses in the area the La Marquesa Golf Course of Ciudad Quesada, Its wide fairways with large channels, lakes and obstacles will be to the taste of most players. It is an extremely comfortable course to play on and you will need to use all the clubs in your bag.

A little further on is El Plantio Golf Course, which is an unspoilt area of Elche. It is both interesting and fun to play on, being a filled with trees and 3 large lakes with a great variation of greens. It is planned to be much larger in the near future. From spain-info