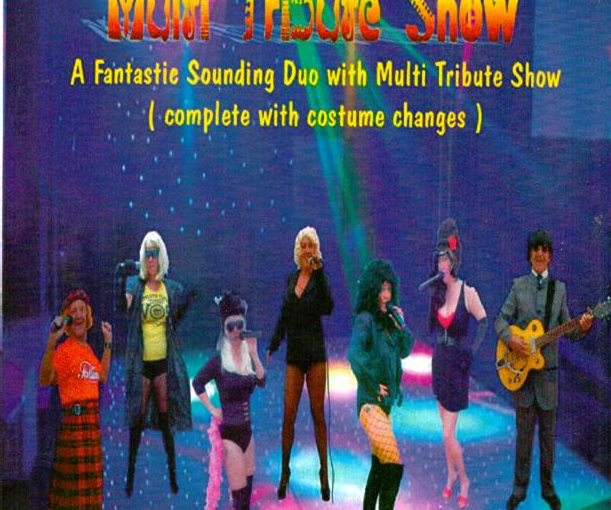 Male/female duo are both talented vocalists/musicians and dedicate the evening to providing varied music and styles of music but always with the emphasis on entertainment. Music from 60’s onwards, party hits and sing alongs that will have the dance floor full.

Part of the act you will seeTributes to Amy Winehouse: Lady Gaga: Cher: Blondie: Madonna: The Beatle: and of course Rocking Jimmy the Bay City Rocker.

A versatile experienced musician, songwriter and performer, plays guitar and keyboards.
With 50 years experience in the music industry, he formed his first band when he was 12, playing guitar and singing in local Rock n Roll bands.
Then as a solo act performing in Folk Clubs and Country Music Clubs before turning professional and performing in Social Clubs and Bars playing whatever style of music was current.
Always looking for new innovations and ideas to improve the sound and performance.
The first Scottish solo act to use a drum machine for backing.
( built from the remnants of an old Hammond keyboard )
The first Scottish solo act to use Sound to Light on stage, long before Discos used them, ( again home built )
The first Scottish solo act to use a Guitar Synthesizer ( Roland GR500 )
This drive to try out new ideas is still apparent today,
They occasionally use Sound & Light Show technology including a large projector screen in the background similar to what you see on the T.V. shows, along with other state of the art equipment to make the shows visually and musically more exciting and interesting whilst performing.
Jackie Heggie,

wp1bd761f2.jpg
Stand clear of the speakers everybody !! Jackie’s gonna start singing,
Such is the power of her voice that she doesn’t need amplification !!
Started singing Bay City Roller songs at 3 years old,
( Singing in key ! Jim’s still got the tapes )
Turned Semi Professional 10 years ago accompanying her dad on stage.
Now the Lead Vocalist in Wildcat she can cover all music styles,
60s, Rock n Roll, Country, Ballads, Pop, Dance and Disco, with her powerpacked vocal style.
All music tracks used are self sequenced in their own recording studio, including Covers, Originals, Megamixes and Parodies.

This is at Hillside Sports Centre on La Marina urb on Friday 1st June 2012 with WildCat Duo and Jackie Heggie singing a Lady Ga Ga number.

A quote from Carol.

Excellent duo – very talented and they sang a good selection of songs. I particularly liked the man singer when he dressed as a Scotsman – hilarious (is there anything under that kilt when he kept flashing) – Yes there was and my friend Ivy – who’d been chasing the poor man round the room to have a look, missed it. Definitely go and see them again. Great evening – Thank you Wildcat Duo………………