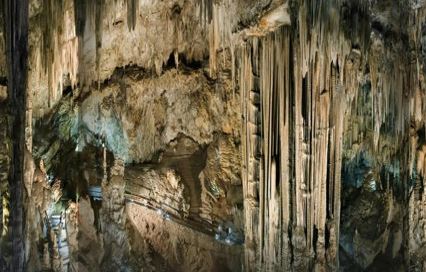 Spanish Caves Information Fancy a little adventure on your next Spanish vacation then Spain is a country with many interesting caves to explore here are a few interesting Caves. Extra info about Caves in Spain

The famous Canalobre Costa Blanca Busot Caves or in English, Candelabra Caves, are located about 3 kilometres from the village, on the slopes of the golden hill, at a height of 700 metres.

The caves comprise a spectacular cavern with curious limestone formations that are quite awe inspiring, and indeed, many of the formations resemble candelabras, as suggested by the name given to the cave.

Caves in the Murcia area

These magnificent Nerja Caves — Cuevas de Nerja — are a series of huge caverns stretching for over four kilometres and feature amongst the top tourist attractions in Spain.

A trip to Andalucía would not be complete without a visit to the Nerja Caves, one of Spain’s most popular and spectacular historical sites.

The Moorish caves of Bocairent


The Moorish caves of the small mountain village of Bocairent situated in the Valencian community.

The artists caves in Rojales are well worth a visit if you’ve never been.

Called ‘Cuevas del Rodeo’ they are situated on the hillside above the town, alongside the primary school and are signposted

‘Cuevas del Rodeo’ from many points in the town. Caves of the Dragon and Hams Mallorca Island

In Porto Cristo, on the east coast of Mallorca, there are two caves: Cuevas dels Hams and Cuevas del Drach, cavern of the dragon.

The caves have formed by water being forced through the entrance from the Mediterranean Sea.

Places to Visit on The Costa Calida

For this publishing, the images of cave paintings and mobile arts are scheduled to be published as the catalog editions in POD so that readers are able to see those images without PC.

Days Out on The Costa Blanca

A day out on The Costa
Blanca Plan before you
go on Holiday, many
places of interest to visit
when here

Go Karts-Index plus the Tracks.

Go Karting in Spain a guide to where they
are situated plus  details of finding them.

Wine from Spain selection of areas and types Wine is an ideal present. And a great way of surprising relatives and or friends.

Ideal at Christmas or for Anniversaries and of course as a Birthday present Top Sellers mixed Wine case – Red (Case of 12) Our most important mixed case of the year! Why? … Continue reading

for large parties, spain-info for Moorish caves of the small mountain village of Bocairent, Spain, for reunions,  wedding anniversary celebrations, for he artists caves in Rojales large villas for golfing party groups,  for large group school reunions, spain-info for Porto Cristo, on the east coast of Mallorca, there are two caves.

SPORT Does the subject of Sporting activities Interest you? If so do come over have a look Add the Odd Comment Or maybe ADD things in this vein to the group site Sporting + Adventures  and Just Fun Time JUST CLICK THE PHOTO https://www.facebook.com/groups/Campoamorplayers/