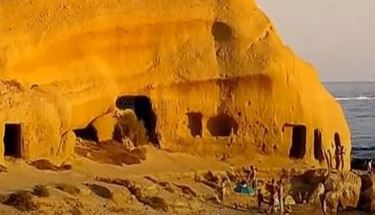 Natural paradises of Spain.#beachesalmeria#beachesspain#vacation#beaches#playadeloscocedores#almeria#beach#eaglebeach#calledEsparto was cooked in the sea for 25 to 30 days, in Águilas Murcia esparto being the main industry it had during the last century. , Beaches of Almeria

The best beaches in the Mediterranean picturesque places.

The Cala Cerrada is known as Playa de los Cocedores because at the beginning of the 20th century there was a very abundant natural plant esparto cooker in the area, it is located in the Cuatro Calas Natural Park, being the last beach in the province of Almería , in the district of San Juan de los Terreros, Pulpí Almería, next to Playa de las Palmeras.

What is most fascinating about this beach, which is about 150 meters long, is its crystalline waters that are not cold and shallow, ideal for children, in the shape of a half moon with fine golden sand, protected by picturesque cliffs eroded by the wind and the sea.

La Cala de los Cocedores, a beautiful sandstone rock landscape with caves on the Andalusian coast of Almeria, It borders the Autonomous Community of Murcia and the beach of Las Palmeras, it is accessed by the national A 332 towards Águilas or starting from the district of San Juan de los Terreros.

Just before the crossroads we take the first detour to the right along a dirt road, it is indicated “Playa de los Cocedores”.

The car can be parked around the beach in the designated parking areas. SERVICES: Public toilets, bins and containers, Cleaning service, access walkway for the disabled, a beach bar in its surroundings, car access with parking for the disabled, parking, it does not have showers, since it is a virgin beach.

Los Cocedores beach in Pulpí is considered one of the most peculiar and beautiful beaches in the Spanish litography. This is thanks to its landscape eroded by the sea, which has created curious caves. In ancient times, these caves were used as cooking places, hence their name, in English ‘cookers’.

This, together with its calm, crystal-clear waters, makes it one of the most beautiful natural spots in Spain.

A home away from home; choose the apartment that appeals to you the most FULLER INFO JUST CLICK

The real name of the beach is Cala Cerrada, but its most popular nickname is Los Cocedores beach, in fact, that’s what everyone calls it. This name comes from the fact that at the beginning of the 20th century there was a natural esparto grass cooker here, used by the locals to obtain this fibre. These cookers can still be seen at the ends of the beach.

It is possible to reach it from Pulpí or Águilas along the A 332 national road. It has easy-to-follow signs. Also, it has a large car park, so it is possible to go by car without any problem.

Given the large influx of people during holiday periods it can be difficult to find parking, but it is possible to get there by public transport. There are several buses that go there.

Declared a protected landscape in 1992 and included in the Red Natura 2000 network as a site of Community importance, the area is inhabited by native plants such as the Halocnemum strobilaceum or “garbancillo”, as well as local animals including pilgrim hawks, wetland birds, rollers and red-tailed lizards

These magnificent Nerja Caves — Cuevas de Nerja — are a series of huge caverns stretching for over four kilometres and feature amongst the top tourist attractions in Spain.

A trip to Andalucía would not be complete without a visit to the Nerja Caves, one of Spain’s most popular and spectacular historical sites.