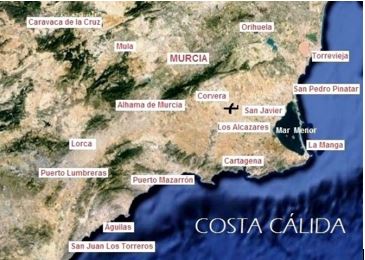 Come visit us on the Costa Calida

Costa Calida Spain Costa Calida extends from El Mojón in the north near the province of Alicante, down to the area of Aguilas in the south with its border to the region of Almeria area. Costa Calida in Spain updates
Northern end of this coastline includes the Mar Menor a coastal inner sea said to be Europe’s largest inner sea. The Mar Menor is separated from the Mediterranean by a 22 km-long spit of land called La Manga.
Cartagena and Mazarrón are two other important coastal towns in the region.

The Regional Park of Sierra Espuna is absolutely stunning! Located inland in the province of Murcia.

Street Markets in Murcia area of the Costa Calida. These weekly markets are also often referred to as Flea Markets. Very popular for fresh fruit and vegetables as well as clothing of all kinds

———–IS THIS THE BREAK YOU NEED? Or POSSIBLE DESERVE?

During your stay, you will enjoy superb horse riding along with the wonderful Spanish climate.

The trails are fantastic, and you will experience horse riding through unspoilt pine forests and along golden beaches.

Each day is unique and includes steady canters along sandy tracks and fantastic gallops along firebreaks.

Come and savour your unforgettable beach horse riding holiday that feels like a dream come true!

A visit to the Parque Regional Salinas de San Pedro in Murcia on the Costa Calida.

Caves in the Murcia area

Spain has an unsurpassed richness of prehistoric art,

and nowhere in the country can offer more than the region of Murcia.

La Manga Go-Karts has three Go Kart tracks, split into age and driving experience so everyone is completely safe,

and has a variety of Go Karts to choose from.

Famous for its hot springs which were greatly appreciated by the Romans.

Fortuna is fast becoming popular once again as the town becomes an important centre for hydrotherapy, beauty treatments and other therapies associated with the natural hot mineral

Go-Karts Mar Menor invites you to spend an unforgettable day with your family and friends.

Balneario Archena Spa Baths on the Costa Calida in Murcia

Archena is home to a hot water mineral spa, dating back to Roman times and has 3 hotels built around on the Costa Calida Spain.

Located next to Sierra de Almenara Nature Park and a 10-minute drive from Águilas and the beaches of Costa Cálida.

Lorca is a town in the province of Murcia Spain.

Locally Totana is known as a pottery city it boasts a rich and varied cuisine with some traditional products such as the torta de pimiento molido (ground pepper pastry), the “santiaguitos” (a Totana’s traditional candy) and the liquor called mantellina.

The Costa Calida begins at El Mojon, an old fishing village with a superb beach.

A short distance from El Mojon you will find the Regional Park of Las Salinas y Arenales de San Pedro del Pinatar, the most important wetlands in the region of Murcia.

Flocks of pink flamigos rest here each year. The salt works here were exploited by the Romans and are a complex network of pools. from here take the road to San Pedro del Pinatar and visit the Casa del Reloj on the San Sebastian Farm.

Two kilometres away is Lo Pagan, a town with the largest area of open-area mud baths in Europe. These mud baths are recommended for all kinds of skin complaints.

In addition you will find several tranquil beaches, an early morning fish market and ample night-life.

Does your other half deserve Pampering?

Or do you both Deserve getting away for a couple of nights to one of the Local Spas here in Spain?

Archena is home to a hot water mineral spa, dating back to Roman times and has 3 hotels built around them.
What is the source of Archena Spa’s renown and the international recognition it has earned from doctors and scientists?

Primarily, the valuable healing, soothing, and anti-catarrhal properties of the waters classified as rich in calcium, sodium, chloride and sulphur, with abundant hydrogen sulphide, which rise at a temperature of 52ºC and are used for a wide range of inhalant treatments and balneotherapy, especially applications of hot mud.

An excellent natural remedy for the treatment of the bronchial tubes, the nose, the throat, the skin and the motor system, the waters rich in calcium, sodium, chloride and sulphur constitute a toxic-free, efficient and healthy treatment to combat numerous variously chronic ailments that are due to environmental factors or organic deficiencies, including children’s disorders:

from bronchitis and laryngo-pharyngitis to various forms of rhinitis and sinusitis.

Along with the mud applications, the hot springs constitute the chief remedy against arthritic disorders and rheumatic illnesses, while balneotherapy is a valuable aid in cases which also require post-traumatic or postoperative motor rehabilitation.

We should add that the tranquil, healthy and relaxing atmosphere, the mild climate and the natural beauty of the place also go to combat stress and fatigue, ensuring that the treatments are more effective and their effects more lasting.

The Mar Menor is the ‘world’s largest pool’ and sits in the southeast of Murcia.

It is a shallow lagoon of 170 square km with warm waters and gentle winds. It is known to be one of the best places in Europe to learn water sports. First the Phoenicians then later the Arab Kings made this ‘little sea’ their summer retreat.

The Mar Menor is separated from the Mediterranean by a narrow strip of land only 22km wide, called La Manga del Mar Menor. its sandy beach and clear waters have made it one of the highest regarded resorts on the Mediterranean.

The beaches are complimented by a huge range of hotels, casinos, golf courses and everything a holiday-maker could wish for.

Puerto de Mazarrón is a seaside resort town with excellent hotel facilities and a lively nightlife.

You must visit the fishing port and the fish auction. The local coastline offers splendid beaches and unspoilt coasts.

About 3km from the coast is the town of Mazarrón with some excellent buildings including the Town Hall and several churches.

Here too you will find the ruins of Velez Castle.

The coastal road takes you southwest to Aguilas, an old Roman fishing port. Hornillo Wharf, where iron was loaded for shipping still stands, a reminder that this was once a 19th century mining town.

In the centre of Aguilas you must visit the lovely gardens in the Plaza España, the 19th century Town Hall and the impressive church of San José.

In the high part of the old quarter stands the castle of San Juan de Aguilas, built in 1579.

At the foot of the castle is the harbour and a typical lighthouse. The coastline here offers excellent diving.

Located next to Sierra de Almenara Nature Park and a 10-minute drive from Águilas and the beaches of Costa Cálida.

Lorca Spa Town in the province of Murcia Spain.