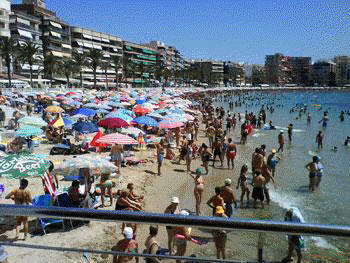 Costa Blanca Information The Costa Blanca is Spain’s hotspot for holiday makers, having some of the biggest holiday resorts available here for the British tourist. Books Maps and Guides Costa Blanca

El Hondo Nature Reserve protected nature reserve on the border of Elche and Crevillente where the rivers Rio Vinalopó and Rio Segura channel together to form a great natural lagoon.

Cycling Costa Blanca South Spain area Clubs meet ups information getting out and discovering where we live on two wheels come and join us.

Bodegas Cerda Hondon de las Nieves Very popular with locals and Tourists come and take part in tasting of the wines and if interested taking away your choice of wine.

Things to do places to go days out accommodation and much more in Torrevieja area on The Costa Blanca in Spain.

Caves in Spain Worthy of a Visit

Spanish Caves  Fancy a little adventure on your next Spanish vacation then Spain is a country with many caves to explore a few Spanish Caves.

Bed and Breakfast Close to Alicante.
from Spain info B&B

B&B  Bed and Breakfast plus local Hotels near to Alicante airport on The Costa Blanca. from Spain info B&B Information on the main areas where you could be interested in for your next Holiday B&B.

Golf Valencia Spain Come on down and play in the Sunshine

Golf Valencia Spain Information on Golf Courses here at Valencia on The Costa Blanca in Spain.

Costa Blanca Bowls Clubs That do it OUTSIDE all YEAR.

Lawn Bowls Clubs on The Costa Blanca in Sunny Spain.

Costa Blanca Bowls Alicante is the southern most province of Valencia region.  It’s coastline is called the Costa Blanca. The capital Alicante is approximately half way down the coastline.

All the bowling clubs in Alicante are reasonably near the N332 coast road, which runs from Javea down to Torrevieja. Alternatively, you can use the AP7/E15 motorway,(the Alicante – Ondara stretch is a toll road).

Bird Watching Costa Blanca the geographical position of Spain as a country means that it is located directly on a major bird migration route for a vast array of species.  The fact that many migrating birds use the coastline as an aid to navigation means that they pass over and stop off along the Valencian coast.

Camper Sites on the Costa Blanca.

Camper sites in Spain along the coast line of the Costa Blanca. North and south of Alicante camper sites.

Busot on The Costa Blanca.

Busot with its fine mountain views is located midway between the Historic City of Alicante and the lively commercialised town of Benidorm.

Campsites Come and choose a Campsite on the Costa Blanca, you are guaranteed a fantastic holiday from Spain info campsites.

A guide to finding local campsites.

Information on the main areas

where you could be interested in for your next Holiday.

Many of us would like our ashes scattered at sea, and where nicer than in the beautiful warm waters of the Mediterranean, and Rest in Peace with the Dolphins and other magical creatures of the sea.

Days Out On The Costa Blanca

Property Sales local on the Spot the most recent special offers

Gay Alicante Gay Pink Spain where to visit and or stay in the Alicante area on The Costa Blanca.

Index of Gardening in Spain

A few lighter moments in Life.
Have a Smile Take a Breather

What’s on offer at La Marina

Callosa de Ensarria is a Valencian town and municipality located in the comarca of Marina Baixa 50 km from the city of Alicante. Situated in the valley of the river Guadalest

Being part of the province of Alicanté,  also known as ‘the White Coast’, is home to some of the cleanest beaches consisting of pure white sand.

This area is a huge hit with British and German tourists as it is home to two of the biggest tourist traps which Spain has to offer: Benidorm and Alicanté.

Click ABOVE for a list of Hotels, Guest Houses, Apartments and Villas in the Torrevieja area of Spain.

If you are after a bit of retail therapy from your holiday then the Costa Blanca is the place for you. One of the huge advantages of having two of the biggest tourist cities in Spain in the same region is that everything you could need is available, from tourist shops to ones selling local goods.

The area is all about the nightlife and entertainment, again with Benidorm being one of the biggest and most famous destinations to visit in mainland Spain.

La Mata, also known as as LaMata and TorreLaMata, is one of the fastest expanding towns in the whole of Spain,
but if you’re coming to La Mata, try to sample the delights of everything that La Mata has

Cocentaina is a town that, after the image of modernity that gives it its current urban appearance, hides a long history. town is famous for Medieval Market