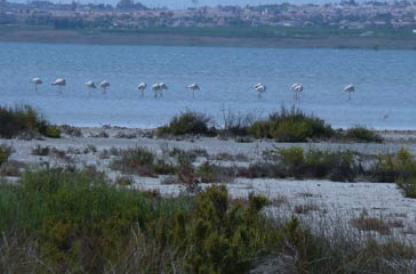 Bird Watching Costa Blanca the geographical position of Spain as a country means that it is located directly on a major bird migration route for a vast array of species.  The fact that many migrating birds use the coastline as an aid to navigation means that they pass over and stop off along the Valencian coast.

The east coast of Spain, particularly the area that lies within the Valencian Community, offers some of the best bird watching in Europe.

Of course, bird life in Spain is exceptional, by anyone’s standards, but this is all the more notable in the Valencia region of Spain.

Indeed, bird watching in Valencia is unusual for its extraordinary diversity.  This is due to two key factors:

Firstly, the geographical position of Spain as a country means that it is located directly on a major migration route for a vast array of species.

The fact that many migrating birds use the coastline as an aid to navigation means that they pass over and stop off along the Valencian coast.

Secondly, the major positive influence for bird watching in Valencia is the hugely diverse habitat range.

As a result, there are terrific opportunities to see a bewildering array of bird species – so much so that many people coming for bird watching in Spain naturally head for the Valencia region.

This has a startling array of different habitats that support numerous different species:

Perhaps the best known birding site in the Valencian Community is the Albufera de Valencia, an internationally important coastal wetland immediately to the south of the city of Valencia.

The area covers over 21,000 hectares and is now declared a Natural Park and does enjoy some form of environmental protection (more on that later!).

There is a visitor centre with hides and an observation tower although nothing on the scale of (say) RSPB reserves in the UK.

It has to be said that there is a huge amount of excellent work being done by some exceptionally dedicated organisations, although like most birding areas in Spain, the area is still not that user-friendly to the visiting birder.

This tends to mean that you are unlikely to get the best out of your bird watching trip, unless you know exactly where to go.

The species list for Albufera is too numerous to include fully here, save to say that its Mediterranean coastal location and varied habitat means that it´s worth a visit at all times of year.

Spring and Autumn migration in Spain is always interesting.  The breeding season is superb for all the European Herons, Egrets and countless waders.  Winter, when temperatures are extremely mild, bring in an array of visitors from Northern Europe and beyond.

Needless to say, the best way to enjoy and maximise seeing the bird life in Albufera is to take a guided bird watching tour with a local professional bird watching guide.

They will know the “hotspots” and will also be aware of the optimum periods for bird watching in Albufera.

My last guiding trip to Albufera was at the end of September.

We visited the hides first then spent the day covering the whole of the Albufera area, stopping off at some favourite hotspots for birding in Valencia.

There were a surprising number of straggling summer visitors, including a few Collared Pratincoles, and numerous Black Winged Stilts (although the latter are tending to over-winter along the coast), Little Ringed Plovers and Squacco Herons.

Regulars included Avocet, Greater Flamingo, Marsh Harrier, Fan Tailed Warbler and Purple Gallinule which have done well throughout the Valencian coast of Spain over the past 3 years.

Some early winter arrivals included Snipe and Little Stint, but the best spectacle was enjoyed towards the end of the day when a group of 5 pale form Booted Eagles passed over.

As we were watching them, one dived into the rice fields and took a juvenile Moorhen!

Other Coastal Wetlands in Valencia.

The Valencian coastline offers much more for people interested in birding in Spain than just Albufera, and within an easy day´s reach are a number of other superb sites.

Over this summer and into the autumn I´ve been fortunate enough to enjoy watching a number of superb species to be found in the coastal wet lands of Valencia including: the Glossy Ibis, Spoonbill, Water Rail and Purple Heron.

THE BLUETHROAT IS A REGULAR WINTER VISITOR TO THE VALENCIAN REEDBEDS

My winter outings have been rewarded with views of Bittern, Bluethroat, Iberian Grey Shrike and Marsh Harrier.

A favourite bird watching trip in Valencia for me is one that takes in a pebble beach before heading inland, passing a number of lagoons and reed beds before returning through coastal heathland and later rice fields.

Every trip is different and there´s always some unexpected occurrence…like the time when we were sitting enjoying a sandwich in the autumn sunshine and were treated to Marbled Duck and Purple Gallinule in the same binocular field of view!

Up onto the Spanish Steppe.

Much of this vast area is given over to cereal farming with some vineyards plus a number of lagoons.

The majority of the Valencian Steppe comprises a huge area that sits at over 900 metres above sea level, making summers extremely hot and winters bitterly cold.

However, it´s always worth a birding trip to Spain and this is one of the best areas to watch Great Bustards in the country.

The farming villages of the Spanish Steppe remain the same today as they were years ago and one can often watch as Rock Sparrows flit in and out of the old stone buildings.

Larks are also well represented with Crested and Calandra being reliable.  Dotterel often drop by on their migration routes as do Whinchat and Wheatear.

FLAMINGOES ARE RESIDENT THROUGHOUT THE VALENCIAN REGION

Flamingoes are also seen in good numbers, as are waders such as Ringed Plovers, Wood Sandpiper, Curlew Sandpiper and Avocet.

Raptors are numerous owing to the rabbit population with Buzzards and Booted Eagles being regulars.

Birding in the Spanish Mountains & Heathland.

The hanging valley in which I live is bounded by craggy mountains on either side, whilst the lower reaches are covered in Mediterranean Scrub.

Although the valley is just 4km long, our recorded year round species list currently stands at 76 – which just shows how exceptional birding in the Spanish mountains and heathland can be!

THE CRESTED TIT IS A REGULAR GARDEN VISITOR IN LA DROVA

As with many locations, there are often wonderful surprises, like a few weeks ago when a loud screeching interrupted the peaceful morning stillness.

I quickly grabbed my binoculars and watched as a pair of Short Toad Eagles passed through the valley.  Other passing highlights have included Golden Eagle and Griffon Vulture.

The Future of Birding in Spain

Owing to its geographical position, habitat range and climate there is outstanding bird life in Spain – as anyone who has been bird watching in Valencia, for example, will confirm.

The big challenge facing conservationists, Eco-Tourism Guides and those interested in bird watching in Europe is that of education – with this of particularly vital importance to Spain and the younger generations of Spaniards.

For centuries hunting has formed an integral part of Spanish culture, and whilst there is control and, no doubt, many law abiding hunters, there are still horror stories.

However, I do believe that the future is positive…conservation is gaining an initial foot-hold in modern Spanish culture and associations are becoming better organised with the younger generations keen to learn more.

Education and raising awareness, of course, lie at the heart of future progress.

Perhaps the most important point to appreciate, for anyone interested in birding in Europe, is that Spain has so much to offer!

Indeed, there´s so much more to this wonderful country than beaches and sun with the beautiful countryside alive with hundreds of bird species – making bird watching in Spain a paradise for any keen birder.

Let’s just hope that, as the economy struggles on, the authorities grasp the fact that Eco-Tourism and Conservation can play a significant part in the future of  Spain with the fauna of Spain of strategic importance.

Written by David Warrington who is a professional Bird Watching Guide in Spain.  David lives in the village of La Drova in Valencia and offers value for money guided bird watching tours in Spain for groups and individuals, throughout the Valencian Community.

For details of David’s Guided Bird Watching tours in the Valencia area either go to www.valenciabirding.com or email him at mailto:naturetrailspain@gmailmail.com

From rollers to bee-eaters, bustards and coursers to larks, nightjars, buntings and wallcreepers, Spain is recognised as one of Europe’s top destinations for birdwatching.

This new photographic guide for general wildlife-watchers by naturalist James Lowen and Spanish photographer Carlos Gonzalez covers the 300 birds most likely to be seen on any visit to the country, with detailed text and superb photography, selected to highlight key identification criteria.

Pocket-sized and portable, Birds of Spain is the perfect companion for any wildlife-watching tourist