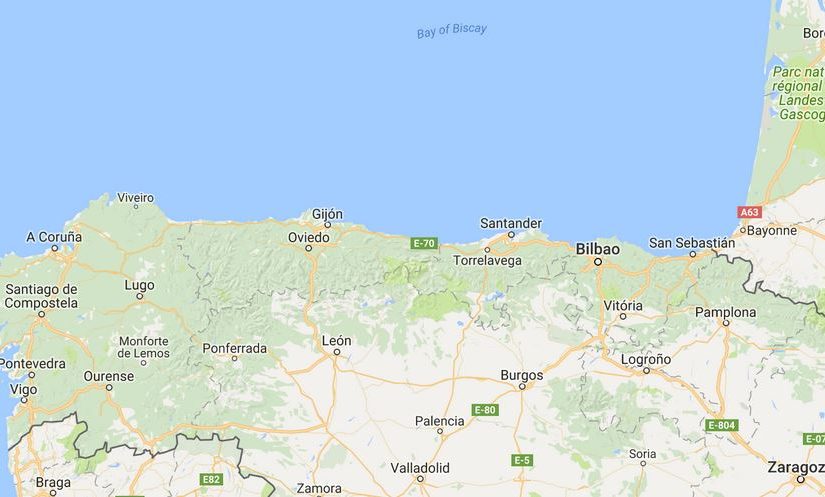 Costa Verde  Almost the entire coastline is backed by the northern mountain range of the Cordillera Cantabrica and succeeded by the Montes Gallegos on the western side.

Beautiful coast line mountains, valleys and rivers. Come to the peace and calm of Cantabria.
http://spain-info.co.uk/cantabria-costa-verde/bungalows-cabins/

Santander   perfect gateway 2 all the most beautiful unspoiled parts of Spain.

Sailing from Plymouth or Portsmouth to Santander offers a much more relaxing alternative to flying.

And by taking your car, you’ll be free from airport delays, free from the hassle and expense of baggage restrictions, and free to explore the surrounding area at your own pace. Local Accommodation.

Santander is the main port city of northern Spain on the Bay of Biscay west-northwest of Bilbao. Cantabria  Costa Verde Green Spain. Santander the gateway to Northern Spain on the Bay of Biscay west-northwest of Bilbao.

Surfing information in the Cantabria district.

Almost the entire coastline is backed by the northern mountain range of the Cordillera Cantabrica and succeeded by the Montes Gallegos on the western side. This well-equipped hotel is situated just 150 metres from Santander’s Sardinero Beach and Casino.

The Santemar features a Japanese garden, on-site parking, varied dining options and air-conditioned rooms. All of the rooms at the Santemar H… More.

A list from the Cantabria area of Campsites  around Santander.

Listings for your next holiday of Cantabria Campsites Santander.

On the Costa Verde in Spain Cantabria is nestled in the centre of the northern coast of Spain, between Asturias and the Basque Region.

http://spain-info.co.uk/cantabria-costa-verde/cantabria-campsites-santander/
Surfing at Somo Cantabria on the Atlantic coast line in Spain.

Llanes is a traditional fishing port, with an active harbour and many notable monuments and traditions.

Asturian municipality in northern Spain. Llanes is bounded to the south by the high ridge of the limestone Sierra del Cuera. The region is part of the Costa Verde (Green Coast) of Spain, which is known for its spectacular coastal scenery, beaches, and mountains.

Llanes lies to the north of the Picos de Europa (Peaks of Europe), a mountain range which geology is entirely of limestone karst.

Ribadesella Ribadesella is a small municipality in the Principality of Asturias. Known for its location on the Cantabrian Sea. As well as for the outlet of the River Sella, Ribadesella is a town that forms part of the Picos de Europa (Peaks of Europe).

It is bordered on the east by Llanes, on the south by Cangas de Onís and Parres, and on the west by Caravia.

Famous are the “Indianos” estates, built by fortune seekers during the 18th-19th century who came back from the ” American Indies” with their new found wealth.