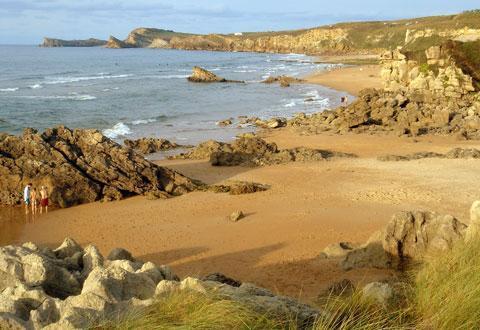 Cantabria Costa Verde Green Spain. Santander the gateway to Northern Spain on the Bay of Biscay west-northwest of Bilbao.

Beautiful coast line mountains, valleys and rivers. Come to the peace and calm of Cantabria.
https://spain-info.co.uk/cantabria-costa-verde/bungalows-cabins/

Cantabria is a Spanish province and autonomous community with Santander as its capital city.

It is bordered on the east by the Basque Autonomous Community (province of Biscay), on the south by Castile and León (provinces of León, Palencia and Burgos), on the west by the Principality of Asturias, and on the north by the Cantabrian Sea.

A list from the Cantabria area of Campsites  around Santander.

Listings for your next holiday of Cantabria Campsites Santander.

On the Costa Verde in Spain Cantabria is nestled in the centre of the northern coast of Spain, between Asturias and the Basque Region. https://spain-info.co.uk/cantabria-costa-verde/cantabria-campsites-santander/
Surfing at Somo Cantabria on the Atlantic coast line in Spain.

Cantabria is the richest region in the world in archaeological sites from the Upper Paleolithic period.

The first signs of human occupation date from Lower Paleolithic, although this period is not so well represented in the region.

The most significant cave painting site is the cave of Altamira, dated from about 16,000 to 9000 BC and declared, with other nine Cantabrian caves, World Heritage Sites by UNESCO.

Surfing information in the Cantabria district.

Almost the entire coastline is backed by the northern mountain range of the Cordillera Cantabrica and succeeded by the Montes Gallegos on the western side.

Spanish is the official language of Cantabria. The eastern part of Cantabria contributed to the language’s origins in a significant way.

Cantabrian language, or Mountain language, is hardly preserved in the West of Cantabria and some zones of the Pas Valley and the Valley of Soba, in its Eastern zone. This language has neither regulation nor official recognition.

Cantabria is part of Green Spain, (España Verde) named because of its lush pastures and mountainous forest covered landscape. 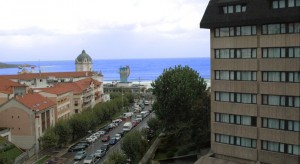 This well-equipped hotel is situated just 150 metres from Santander’s Sardinero Beach and Casino. The Santemar features a Japanese garden, on-site parking, varied dining options and air-conditioned rooms. All of the rooms at the Santemar H… More.

The area runs from Galicia in the east all the way along the northern coast of Spain to the French border in the west.

The coastal area is full of beaches, some relatively untouched, all with golden sands. Further inland Cantabria boasts two mountain ranges: the Cantabrian mountains to the south and the Picos de Europa to the west.
Despite its small size, there are seven natural areas of undoubtable interest in this autonomous community: Cantabria Costa Verde

Santander is the main port city of northern Spain on the Bay of Biscay west-northwest of Bilbao. It was a major port after the discovery of America and is now a resort and industrial center.

Our arrival port of Santander is the perfect gateway to some of the most beautiful, unspoiled parts of Spain, and provides easy access to south-west France.

Sailing from Plymouth or Portsmouth to Santander offers a much more relaxing alternative to flying.
And by taking your car, you’ll be free from airport delays, free from the hassle and expense of baggage restrictions, and free to explore the surrounding area at your own pace. 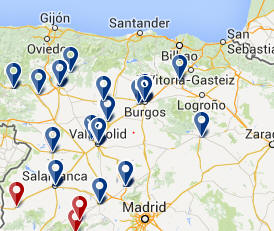 From rugged snow-capped mountains to long stretches of glorious sandy beaches and with lush pastures, wild rivers and extensive forestry in between, Cantabria in northern Spain has just about everything to offer the serious walker, casual rambler or holidaymaker in search of a gentle stroll.

This book brings together some of the highlights of the Cantabrian landscape by offering the reader an easy walking route – the walks range from one to eight kilometres – along with tips on what to look out for on the way be it a particularly stunning view, a point of historical interest or some of the abundant flora and fauna.

Real Greek cooking Courses a selection from top Chefs to fit in with when it is convenient for yourself to take part. Been thinking of stepping up your culinary skills? Then this is your opportunity