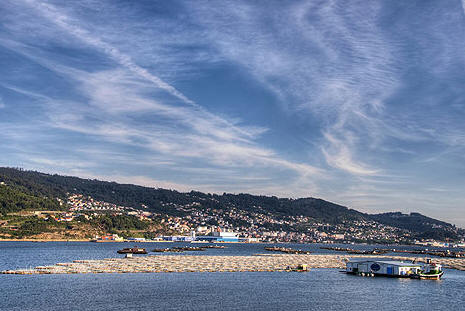 Galicia is known as “the green corner of Spain and it is famous for its beautiful landscapes, its tasty dishes and its original architecture

Galicia, or sometimes Galiza, is an autonomous community in northwest Spain, with the official status of a nationality Area: 29,574 km² Population: 2.781 million (2012)

The Mogor labyrinth in Galicia, Spain is the oldest known of so far – 2000 BCE. Photo by Jeff Saward

The climate of Santiago is typical of the spanish Atlantic coast: wet winters with frequent rains which, in light or heavy bursts, lasts from September to June. The summers are slightly less rainy than the rest of the Cantabrian coast.

Temperatures remain mild throughtout the whole year with a yearly average of 19ºC. They drop down to about 8ºC in January, the coldest month.

Galicia is known as “the green corner of Spain ” and it is famous for its beautiful landscapes, its tasty dishes and its original architecture. Galician architecture can be admired both on the monumental jewels and on the traditional rural buildings

Galicia´s inland is mainly mountainous and its coastline is indented by many deep estuaries called “rias”.

The sea has a moderate influence on the weather of Galician coastline and that is why the Rias Baixas (Low Rias) are the warmest region in Northern Spain . Inland rivers are so numerous that a well known Galician writer said that Galicia was “the country of one thousand rivers

Ourense is the Capital of Galicia.

Fancy taking a dip in a large open-air thermal bath, daytime or nightime, any time of year, in water with a temperature of over 40 degrees centigrade, and right beside the Miño river.

Galicia is a huge, natural place where the nature is important. You can enjoy the beautiful well-preserved landscape. You can also find many cliffs and caverns which the sea and the time have worked into the rocks with beaches of thin and white sand.

GALICIA: THE GREEN CORNER OF SPAIN

John O´Neill writes about the people and the province of Galicia where he and his wife have lived since moving there in the summer of 2006: humorously, knowledgeably, contentiously, and with no little respect for the people and customs of Spain’s largely forgotten region.

Full of personal moments and incidents that the reader will relate to.

The old city has pleasant winding streets which open out into sunny plazas filled with lots of tapas bars. The fish tapas in particular are very good – not surprisingly given its important fishing fleet!  Wander down the Rua Real and surrounding streets where there is an interesting mix of fishermen’s houses and much grander buildings. The Rua Real was once the main street of Vigo and runs from the port to the church of Maria. Some of the original fishermen’s houses on this street date back to the early 16th century.

If you are trying CBD for the first time, CBD gummies are a safe, fast and effective way of taking CBD.

This friendly hotel is just a stone’s throw from the beach, it has spacious terraces overlooking the Vigo estuary where you can sit back and enjoy the stunning sunsets.. More Latest booking: 12 hours ago

Is it possible to receive UK TV channels? Yes, it is possible to receive BBC, ITV and Sky programmes from the Astra2 satellites, plus dozens of other free channels. But the size of your dish is critical and this will need to get bigger the further south you are. The LNB may also be important. And you need to buy a BBC/ITV card from Sky, for which they will require a UK address.

Here’s a very helpful site which will help those with a keen interest in this subject – http://www.astra2d.co.uk

The Quick Trips to Spain Series provides key information about the best sights and experiences if you have just a few days to spend in the exciting destination of Galicia.

So don’t waste time! We give you sharp facts and opinions that are accessible to you quickly when in Galicia. Like the best and most famous sightseeing attractions & fun activities (including Santiago de Compostela.

Where to shop until you drop, party the night away and then relax and recover!