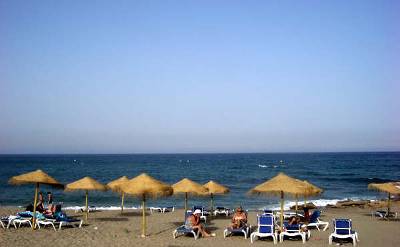 Daily outings with the Family

A go-karting track on La Marina’s doorstep. There are different categories of Karts which race at different times. The entrance is just off the N-332  Come down for a Day Out

This is great fun for kids and adults (big kids!) alike

Marine and exotic animal park near aqualandia.  Mundomar is a unique adventure. It’s main characters is being beautiful with exotic marine animals.

These can be observed in their natural environment.  You will learn from them and enjoy yourself sharing with them the mysterious corners of a fascinating, enchanting park.  The parrots will entertain you.

They are as crafty as they are talkactive.  Admire their flashy and exotic colors.

Go through its outstanding landscape and cross its lakes.   Penetrate deeply into its vegetation and explore its paths.

You will see impressive waterfalls and sheer, precipitous rocks.  Enjoy a fascinating encounter with the dolphins and seals.

They are real stars of the park.  These loveable and intelligent beings will surprise you with all their acrobatics.
Address : Sierra Helada, s/n – Rincón de Loix – Benidorm (Alicante)
Information Tel: 96-586.91.01 or 02 or 03

Come and visit us for a Day Out

The Nature Reserve’s fauna is distinguished by the presence of invertebrates, such as the crustacean Artemia salina. As for vertebrates, the bird life is worthy of note, especially the flamingo.

The second aquatic attraction (water park) to open in the region of Valencia opened in 1986. Situated on a natural streambed in Quesada de Rojales. Has an area of 21,000 m². Has water slides- 4 gentle slides and 2 kamikaze, 3 children’s pools, a large swimming pool with free sun beds and parasols, restaurant, cafeteria, lawn & picnic area, lots of parking, etc.

Each tour lasts around one hour forty-five minutes and on route you’ll discover many of Torrevieja’s hidden sights.

Take to the clear blue skies of Alicante with this wonderful hot air balloon flight in Catral.

The artists caves in Rojales are well worth a visit if you’ve never been.

Enjoy an unforgettable, sun kissed excursion on jetski along the rugged coast of Moraira. 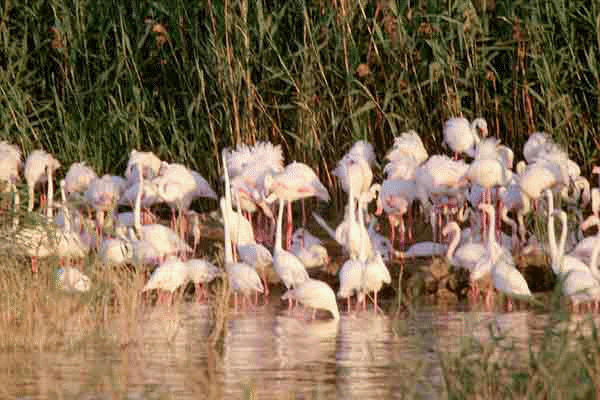 El Hondo Nature Reservee, lies between Elche and Crevillente, it is designated an Area of Outstanding Natural Beautey

El Hondo, in 1988 and subsequently declared a Nature Reserve by the Regional Government, the Generalitat Valenciana, in 1994.  Appearing in the lists of the RAMSAR

is located in a vast palm tree field that received the name “Huerto de los Leones” (Lions Field) because of the two lion statues that dominated the entry.

As its name announces, it is in the locality of Elche (Alicante), which is internationally renowed for its lofty shoes production. Furthermore, Elche’s palm grove has been granted World Heritage status.

The palm tree was originally imported by the Arab when they conquered the peninsula, and ever since the time of Jaime I it has been legally preserved and protected.

Today, between four thousand palm trees, Rio Safari Elche shelters numerous animal species from all around the world; from Florida turtles and chameleons to weasels, to zebras, to crocodiles, ostriches, lions, parrots, an Asian elephant or European lynxes, and many others. Visit the Reptiles’ Cave, where the most singular and remote ecosystems have been recreated for our saurians; the Temple of the Tigers, a wild and untamed area surrounded by water;

the Primates’ Isle, an open oasis with trunks, swings and hammocks for the chimpanzees’ entertainment and rest. All of this you will see amazingly close! Come and visit us for a Day Out 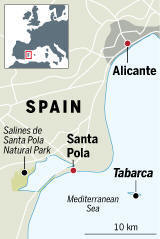 This island off the coast of Alicante, southeast Spain, is just under 2km long and no more than half a kilometre wide. .

There are no roads, mainly because there are no cars. Tabarca is indeed one of those “ecological” places: it sits at the centre of a 1400-hectare marine reserve where fishing and scuba diving are strictly controlled, making these pristine waters some of the best in Spain for snorkelling.

Ferry boats run from Torrevieja,Santa Pola Alicante and Benidorm Come and visit us for a Day Out Daily Outings

Come and visit us for a Day Out the largest, most exciting theme park in Europe, with incredible rides & shows all around the park; Pirates, Gladiators and Comedy street performers add to fun. 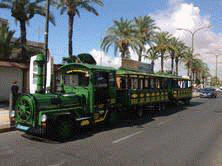 Come and visit us for a Day Out.

Get in, relax and enjoy the beautiful sights in the town of Torrevieja. The tourist train leaves just in front of the fountains every half an hour from 11.00hrs until midnight, Monday – Friday and 11.00hrs until 01.00hrs at the weekends.

Adults are charged at 4€, pensioners 3€ and children between the ages of 1-12 years at 2€. For more information, contact, .

To get to Aquopolis Torrevieja is very easy. It is located in Torrevieja, one of the most privileged areas of Costa Blanca, next to national road CN 332, less than 40 minutes to Alicante and Murcia capital (we have more than 600 parking spaces). 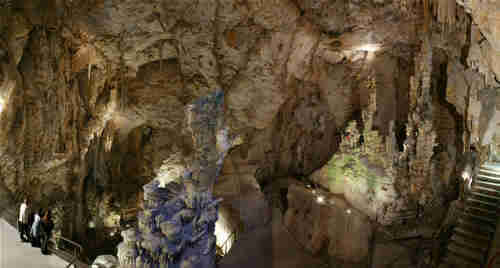 Busot Prehistoric natural cave  Busot offers its visitor the Caves of Canelobre, situated at a distance of 24 Km. from the city of Alicante, 60 Km from Calpe, at a high of 700 m. on the northern side of Cabeco d’Or.

The interior of the cave has got one of the highest vaults in all Spain, and is very similar to a cathedral.  During a visit one can admire the varied and whimsical forms that the rocks have adapted: candelabra, animals and many other spectacular shapes.  On certain occasions the unsurpassable acoustic and atmospheric conditions of the caves