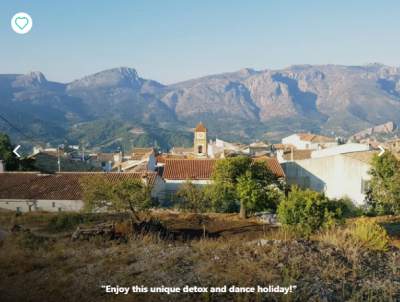 Villajoyosa or La Vila Joiosa on the Costa Blanca

Welcome to Villajoyosa. This gem of a town is hidden 15 kilometers south of Benidorm and 20 kilometers north of Alicante.
Villajoyosa is known locally as La Vila Joiosa and is renowned for having some of the best beaches on the Costa Blanca, consistently retaining their blue flag status.

Fitness camp-Spain offers you the opportunity to nourish and cleanse your body and mind in their detox retreat program. Learn about nutritional therapy and life coaching, enjoy guided walks and fitness workouts. This retreat is perfect if you want to lose weight or increase your health, fitness, and happiness levels. Experience this detox retreat with your partner, friends, or family, and feel refreshed inside and outside! FURTHER INFO CLICK HERE

Villajoyosa or La Vila Joiosa on the Costa Blanca

VILLAJOYOSA
Welcome to Villajoyosa. This gem of a town is hidden 15 kilometers south of Benidorm and 20 kilometers north of Alicante.
Villajoyosa is known locally as La Vila Joiosa and is renowned for having some of the best beaches on the Costa Blanca, consistently retaining their blue flag status.

The beachfront is a haven for bars and restaurants with plenty of palm trees providing shade.
The beaches also provide play areas for children. Located in Villajoyosa, Apartamentos Odisea offers a restaurant and is just 30 metres from the beach. All apartments here boast excellent views of the Mediterranean Sea.

Reservation possible without a credit card

Villajoyosa is also famed for its seafood and you can see this being landed and sold every Thursday afternoon at the local fish market,
Fresh from the market straight to the local restaurants and Villajoyosa boast some of the finest fish restaurants on the coast.
Why not sit back and enjoy some freshly caught prawns or calamari with a nice glass or two of the local wine.

After lunch why not take a visit to the world famous Valour chocolate museum and factory.
Here you can see how the chocolate is made and sample some of the many varieties and flavors’ on offer. The factory produces 40 tons a day and at busy times over 80 tons a day. The chocolate is sold all over the world and is a popular tourist attraction.

HappyVila Fisher Houses are apartments located on the beachfront of Villajoyosa, 2 minutes’ walk from the town centre.

Villajoyosa also has a beautiful sea front with colorful painted houses along the promenade, it is rumored that the houses were painted in different colors so the sailors could see their houses when they were out fishing.

Right in the middle of the old town is the square with some of the best views of the town including the viaduct.

You must visit the Barbera family house, which is one of the oldest villas in the town and was donated to the town hall by the family and converted, into a museum. This glorious villa is a time casual from the 19th centaury and is a very popular destination for tourists. Located in Villajoyosa, 6 km from Benidorm, Camping El Torres features an outdoor pool and views of the sea. Alicante is 31 km from the property.

There is also the church of the assumption virgin which was originally a fortress and dates back 16th century this beautiful gothic church houses many treasures
And a painting depicting of the moors and Christians war.