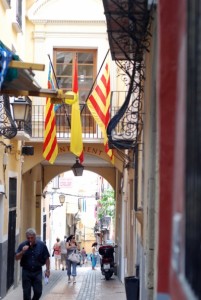 Villayoooo-what? Its pronounced ‘Veeya-hoyo-sa’, a beautiful seaside town on the Costa Blanca in Alicante whose claim to fame is CHOCOLATES.

It was here that cacao first landed on Spanish shores from the Americas and it once boasted many chocolate factories, of which, only Chocolates Perez and another outfit remain.

Oh, this place is also home to Chocolates Valor, a big Spanish chocolate brand that churns out generic chocolate. 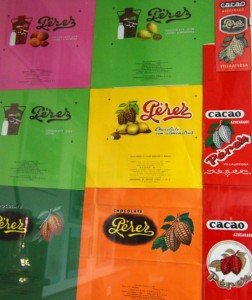 A quest for experiencing the bean to bar journey of chocolates leads to here, to Chocolates Perez, where Paco Torreblanca still use old school machinery to make chocolates.

Having never seen old chocolate machines at work before, this was a welcome break from Pasteleria Totel and a perfect way to spend a day by the coast. Founded sometime in the late 1881 by Gaspar Perez, they were one of the many chocolate making families in Villajoyosa and by some stroke of luck, they have survived whilst their colleagues slowly died off one by one.

They still do a fare share of chocolates there and the best thing is, they do it the old fashioned way. Do not be fooled…these guys are bean to bar, sourcing their bean mostly from Africa.

They conduct factory tours, and have a small museum of their old equipment and a nice little room where they will try to encourage you to part with your Euros.

In this technological age, it was an eye opening experience to see how things were done ‘back then.’ 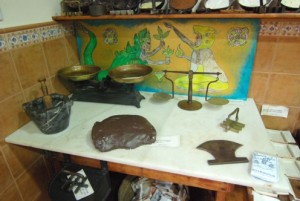 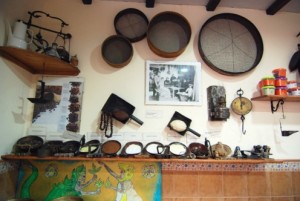 This section is in their showroom, where they try to educate customers about the history of chocolate and how it is made.

The array of chocolate antiquities in here was staggering. This granite stone is called a ‘Metate’, which was used over a small fire to heat it up and whereupon cocoa beans would be crushed into a paste with a large stick.

Look closely at La Maison du Chocolat’s logo and you will see the side view of the metate. 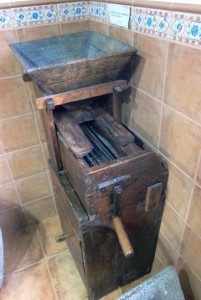 This is an old school winnowing machine.

Winnowing basically means to ‘shell’ the cocoa bean, and I feel for the guy who has to winnow hundreds of kilos of beans with this device! 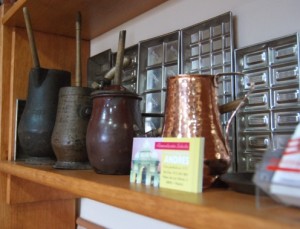 Really cool chocolate pots with molinillo’s, or whisks, that were incidentally invented by Spanish colonists in Mexico.

HappyVila   For your stay at Villajoyosa 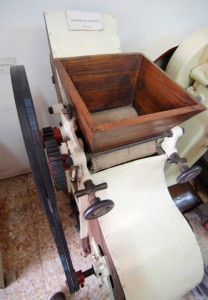 This antiquated device must have been quite the innovation in its day, for it is a nut skinner.

Basically, nuts with their peel go in at the top, and a thick cloth belt rubs them off and the nuts drop into a container, ‘sin piel’ as they say in Spain.

If you have ever hand rubbed rubbed tens of kilos of roasted hazelnuts against perforated metal trays to remove the peel…you will begin to appreciate this machine. Paco needs to get his hands on one of these things… 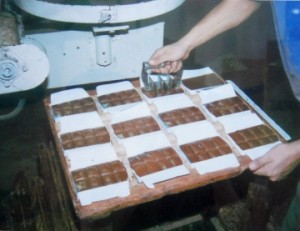 No fancy molds or cutters, and they are still doing it today!

These are the drinking chocolate bars. This will have a place in any small artisanal bean to bar manufacturer today!

This is basically a grinder for cocoa beans that does it work with 2 adjustable (And very heavy) granite stones.

Thankfully, this is a motorized, belt-drive machine that no doubt saved the sanity of many a chocolate worker. 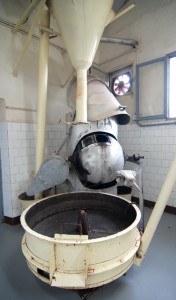 This strange contraption is where the cocoa beans and nuts are roasted.

With skilled hands and careful control of a wood fire under the spherical roasting chamber, the beans are roasted to the desired degree before being dumped onto the collection tray. he beans are then sucked up into the winnowing machine, where the cocoa beans are shelled.

The lighter shells gets sucked away and the heavier cocoa beans drop to a collection chamber at the bottom, where after they are again sucked out into the grinding machine. This grinding machine is just a larger version of the one above.

The granite stones break up the cocoa beans into the size of tiny pebbles.

These are then transferred by hand to a granite grinder to break it down into cocoa liquor. 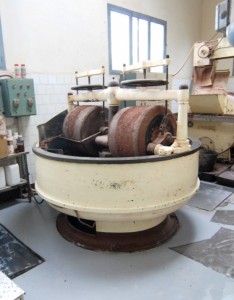 What goes in is a pebbly, dry mass which after hours of grinding, turns into a thick paste.

I had a taste of the chocolate at this point and it was really rough textured and quite unpleasant tasting, due in no small part to the quality of the beans.

Do not misunderstand, Chocolates Perez do not claim to be some fancy, high end chocolate, but they are just maintaining a tradition and are truly proud of what they do.

I’d rather eat their chocolates over a supermarket brand any day. The cocoa mass is then further refined in a 5 roll refiner.

These are basically accurately set, parallel metal tubes through which the cocoa mass pass through.

The rotating tubes are set at a decreasing distance from each other, breaking down the cocoa mass into evenly sized particles as they travel through the different sets of tubes.

Due to the increased exposed surface area process enables the chocolates to be refined with a minimum of heat buildup, which can affect the more delicate flavours of fine chocolates.

However, due to this exposure, the cocoa is also susceptible to contamination as well as foreign odours lurking around the room. At the end of this refining stage, the cocoa is still grainy, but less so, and is very pasty as well. This cocoa mass is then transferred into a huge conch, of which I have neglected to take a picture of, other than its mouth.

The buildup of heat and the shearing action of the blades release the cocoa butter and the cocoa mass magically becomes more liquid and takes on a shine. It is at this point that powdered sugar is added.

The conching process is somewhat like distilling spirits. The distiller controls time and temperature to get rid of the nasty ‘bad head’ and try to keep the ‘good head’.

Ever had knock-you-on-the-ass alcohol vs a beautiful, smooth one? Thats ‘bad’ vs ‘good’ head.

Chocolate is the same, whereby time, temperature and movement are controlled to drive away the bad and develop the good.

Aeration and heat plays a part in flavour development up till a certain point where there are diminishing returns eventuating in flat, lifeless chocolate.

It is the skill of the chocolate maker to balance everything and having had the opportunity to be part of this process at Artisan du Chocolat, it is amazing to see how a previously unpalatable cocoa mass gets transformed by the conching process, enabling once hidden flavours to metamorphose like butterflies from creepy crawlies. 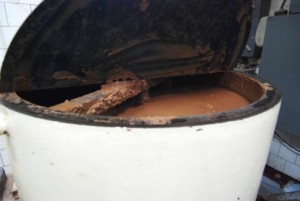 What comes out of the tank is liquid chocolate, which is stored in a large, heated tank. 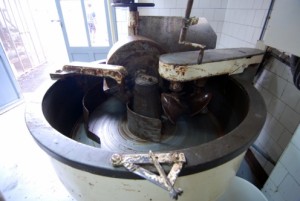 From the holding tank, chocolate is transferred by the bucket to a ‘tempering machine’, and this is the first time I have ever seen this.

It is a far cry from the machines we have today, and my feeling is that this is a modified chocolate tank that is being used as a ‘batch tempering machine’.

A batch tempering machine basically brings a whole batch of chocolate to its correct working temperature and holds it there until it is used up.

The problem with this kind of setup is that even though the temperature remains constant, the crystals continue to build up and gradually thicken the chocolate, making it very hard to work with.

This also happens with modern machines like the Selmi continous tempering machines. The main problem here is that the chocolate does not get reheated above the melting point of the form 5 crystals, enabling more and more of these crystals to form and run about at the correct working temperature.

Shaving means you got a clean face (Tempered chocolate), but it grows back harder, faster and thicker (Thickened chocolate at correct temperature).

When you wax, its removing the hair at its root (Melting the crystals), so the next time hair peeks out, it is softer and not so thick (Smoother, better flowing villajoyosa chocolate).

Most machines like the Selmi are continuos temperers and the only way to ensure a constant number of crystals is a multi-stage tempering machine like the 3 Stage Turbotemper from Sollich.

The chocolate continuously gets reheated to melt away excess crystals and then gets re-crystallized by running over heat exchange plates to bring the temperature down again to the correct working temperature with ‘just’ the right amount of form 5 stable crystals.

That way, the chocolate never gets thicker as you work with it. Of course….such a machine comes at a hefty price! 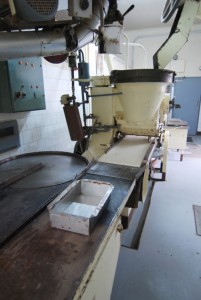 The properly tempered (Crystallized) villajoyosa chocolate is then pumped into a depositor where chocolate is deposited into metal molds. These molds run down a very noisy vibrating belt, where any bubbles are knocked out.

Behind the white tiled wall is actually a ‘spiral cooler’ and a guy at the end of the vibrating belt manually transfers the chocolate molds into the cooler’s belt.

Imagine a walk in fridge with conveyor belts arranged in a spiral from top to bottom. In the distance it takes the chocolate to travel from the top to the bottom, it is crystallized enough to be removed from the molds.

The unmolded chocolate than goes into a separate cooling room where it continues its crystallization.  villajoyosa chocolate. 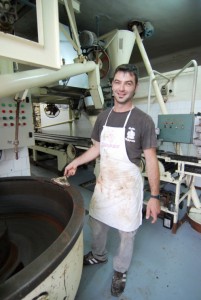 And there you have it! The process of chocolate being made in one of Spain’s oldest surviving bean to bar chocolate manufacturers.

The tour is conducted by Mr Perez himself, whose great grandfather founded the company. A friendly, forthcoming guy who is proud and happy of what they do at Chocolates Perez.  villajoyosa chocolate. This 70% bar was actually quite nice, though if a bit grainy.

It had a bit of sourness to it probably due to the African Foresteros beans and it did have a hint of old socks.

This old socks smell was the same smell from beans my friend gave me from his farm in Malaysia that I will forever associate with uncontrolled fermentation and mold.

Nevertheless, the chocolate had some backbone and a nice chocolatey, roasty flavour villajoyosa chocolate.

Not a world class chocolate with the smoothest of textures, but good eating (In an acquired taste kinda way) nonetheless. Its not expensive either. 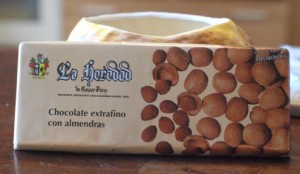 I never really got to eat this one, as my Ecuadorian friends’ kids got their hands on it first.

From their faces, it must’ve tasted good. We are in Marcona Almond country after all… This is Chocolate a la Taza, or drinking chocolate thickened with corn starch.

Mixed with hot milk and paired with churros, it is the ultimate Spanish breakfast.

If you are ever visiting Alicante and the Costa Blanca, a trip to Villajoyosa should be on the cards to visit Chocolates Perez as well as Chocolates Valor’s high tech villajoyosa chocolate factory.

End your day with dinner at Monastrell or its adjoining tapas bar in Alicante to round off a perfect day.