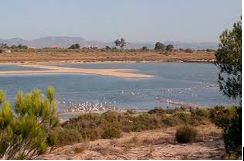 Spanish Natural Parks SPAIN is a country of variety, with plenty of spectacular natural parks and wildlife reserves distributed across the mainland and islands which are well worth a visit.

Here are our favourites:

Natural Park  The Nature Reserve’s fauna is distinguished by the presence of invertebrates, such as the crustacean Artemia salina.

Located inland in the province of Murcia on The Costa Calida.

Inhabited by goats and brown bears, it is the most visited area of the Cantabrian mountain range receiving an estimated two million visitors per year and covers land in Asturias, Cantabria and Leon.

Teide National Park The natural jewel in the Canary Islands is a world heritage area and is linked to Rapa Nui national park on Easter Island. A popular filming site, it has featured in movies including Fast & Furious and Clash of the Titans.

Cabrera National Park The marine beds of this natural park in the Balearic Islands and its isolated glory make it a must-see for divers in particular and those wishing to experience nature in a practically virgin state.

However those wishing to dive in the area are warned they must request permission from the authorities a month in advance.

Doñana National and Nature Park Straddling the provinces of Huelva, Sevilla and Cadiz, Doñana’s marshes and wetlands are home to a variety of species of bird and the Iberian Lynx. Herons, flamingos, storks, seagulls, cormorants, falcons and eagles can all be spotted in the area.

Garajonay National Park Located on the island of Gomera, this national park is an ancient forest conserved in its splendid original state.

It is one of the few remaining laurel forests in the world. Well marked paths allow visitors to explore the flora and fauna within the natural park although the real stars of the show are definitely the trees.

Sierra de Guadarrama National Park This natural park is shared by Madrid and Castilla y Leon and contains 11 different ecosystems within its 33,000 hectares. Forty-five per cent of the animal species that exist in Spain can be spotted within the park.

Monfragüe National Park Monfragüe is the ideal place for bird fanatics. Three hundred pairs of black vultures live in the park, along with 12 pairs of imperial eagles, 30 of black storks, 35 of Egyptian vultures and 1,000 of griffon vultures.

The park, in Caceres, also has more than 200 species of vertebrates which inhabit the banks of the Tajo and Tietar rivers. Spanish Natural Parks.

Ordesa and Monte Perdido National Park Glaciers, conifers and karstic landscapes are all a part of this special area in the Pyrenees.

The park has won numerous titles over recent years, including recognition as a world heritage site and a reserve of the biosphere. It covers an area of 15,608 hectares.

Tablas de Daimiel National Park This area is one of Spain’s best, and few remaining, wetland ecosystems. Its more than 3,000 hectares are home to otters, ducks and kingfisher. Spanish Natural Parks

The Mindful Luxury Retreat aims to help you improve your technique and skill and give you the tools that are needed to keep informing you long after the retreat has ended.

We want you to feel that you have learned and practiced in a creatively nurturing environment and you have gained in confidence and ability, therefore, we limit the number of participants to ensure one to one modifications and encouragement with over 20 hours of professional tuition.

Please contact us for guidance and help at every stage of booking and participation.