The Regional Park of Sierra Espuna is absolutely stunning!  Located inland in the province of Murcia and covering 25,000 hectares it has been protected since 1930.  Pine trees cover most of the park and, as it has some 20 mountain peaks above 1,000 metres, the views over the top of the pine forests are magnificent.  It takes its name from its highest mountain, the Espuna at 1583 meters!

The park has quite an intriguing history.  The region of Murcia enjoyed great prosperity during the 18th century when it plundered its natural resources including most of its pine forests.  when Ricardo Codorniu, a passionate nature lover and forest engineer returned to the region in 1889, he was devastated by the destruction which the years of economic boom had caused.

He set about restoring the forest, replanting some 19,000 hectares and becoming known as the ‘apostle of tress’.  As you drive through the park you’ll notice evidence of his hard work as a lot of the pine trees are planted in straight lines. 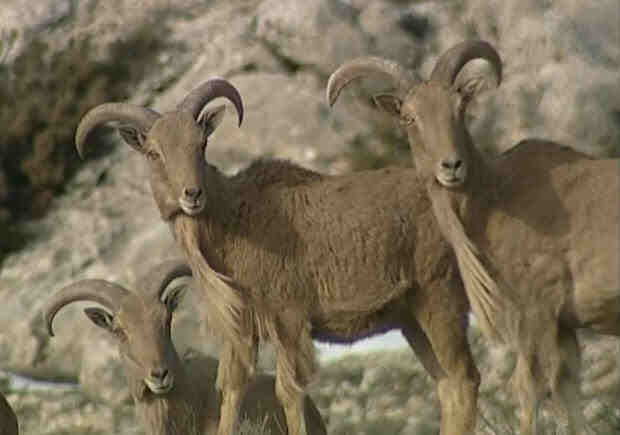 Today the park is criss crossed with many hundreds of kilometres of marked walking and cycling routes.

The mountain road is very well maintained and there are numerous panoramic viewpoints, as well as some great picnic areas.  If you’re lucky you’ll see the Moufflon mountain goats, wild boars and circling eagles during your scenic drive.

This is a circular route so you can drive it in either order! WHILE AT Regional Park Sierra Espuna.

Whilst we were in the Sierra Espuna National Park in May 2011 we stopped by the side of the road where a couple of workmen spread some grain on the ground so that we would be able to see “close up” the wild boar.

After the first group came you will see (about halfway through the video) that two more boar come down the hill followed by the piglets once they’ve decided that it’s safe for them.

What a surprise and an awesome experience! AT Regional Park Sierra Espuna

It offers excellent sports facilities, free Wi-Fi and an outdoor pool. Tennis courts, table tennis, mini golf and playground can all be found at the Camping Sierra Espuña. More

There is free private parking on site. Nearby sights include the typical Murcian villages of Aledos and Mula.

There are many climbing and hiking routes nearby. Guests can visit the Walls of Leyva and the famous Snow Wells (Pozos de la Nieve).

Each bungalow at the Camping Espuña has a kitchenette with a microwave and fridge.

Totana/
An early morning coffee stop, this town is well known for the production of ceramics and pottery.

Viewpoint del Cristo
Stand below the statue and soak up the stunning 360 degrees views, on a clear day you’ll see the sea at Mazarron in one direction and the mountains of the Sierra Nevadas in the other!

Aledo
A tranquil village dominated by the tower del Homenaje, built in the 11th century to control the valley below.  Inside the tower is a tourist office and exhibitions about the tower and the village, climb the steps to the top for more amazing views!  It is free to visit and is open all year Mon-Thurs 08.30-15.00, Fri-Sat 09.30-14.00 and Sun 10.45-13.00.

Ice Storage Huts
Only accessible between 08.00-18.00, the sunken ice storage huts were used from the 16th century right up until the 1920’s to store the winter snow well into the hot summers.  One has been renovated whilst the other two are in a ruined state.

Picnic & Barbecue Area del Hilo
A great place to enjoy your lunch, there is a restaurant, barbeques (used in Winter only) and picnic tables.  The area is sometimes visited by wild boar!

Alhama de Murcia
An inland town with an impressive castle, multi coloured houses in the old town square, a Roman Baths museum and in the Plaza Americas interesting pavement tiles depicting the flags of the Americas and beautiful hand painted map.