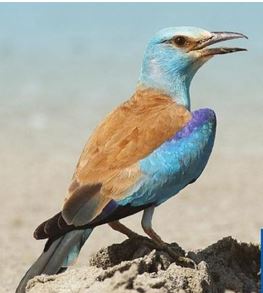 Sierras of Tejeda, Almijara and Almara Natural Park.  Its relative remote nature has meant that it has a high number of endemic species of flora and is rich in wildlife, particularly raptors and mountain birds ..

The Sierras constitute an impressive mountainous region situated as a geographical barrier between the provinces of Málaga and Granada in Andalucía, Spain.

These mountains have always been full of stories legends of outlaws, bandits, rebellions and contraband.

Possible the most geologically stunning of all of Andalucia’s natural parks. Renowned for its unique limestone formations.

From rollers to bee-eaters, bustards and coursers to larks, nightjars, buntings and wallcreepers, Spain is recognised as one of Europe’s top destinations for birdwatching.

This new photographic guide for general wildlife-watchers by naturalist James Lowen and Spanish photographer Carlos Gonzalez covers the 300 birds most likely to be seen on any visit to the country, with detailed text and superb photography, selected to highlight key identification criteria.

Pocket-sized and portable, Birds of Spain is the perfect companion for any wildlife-watching tourist

A large number of sites are covered from Almería in the East to Gibraltar and Tarifa in the West and embracing the Costa del Sol and many inland areas such as Álora and Ronda. The the Costa del Sol has a number of natural areas where you can explore the surprising world of ornithology and the many species of birds that are found herehttps://spain-info.co.uk/spanish-caves-information/

The spectacle of a multitude of species migrating along the best natural areas in Málaga-Costa del Sol and close to the Strait of Gibraltar surroundings is waiting for you.

You can get different trips during migration season devoted exclusively to birdwatching in Málaga and Cádiz, which are the closest provinces to Gibraltar Strait, where millions of migrator cross by, in Spring and Autumn

Visiting privileged natural areas, with all the comfort and accompanied by expert and friendly nature guides. Book Now