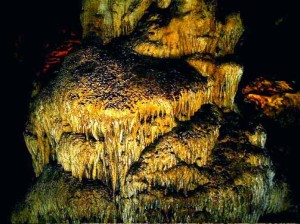 Nerja Caves Caves of Nerja are a series of caverns near to the town of Nerja in the Province of Malaga, Spain. Extra info about Caves in Spain

The magnificent Nerja Caves — Cuevas de Nerja — are a series of huge caverns stretching for over four kilometres and feature amongst the top tourist attractions in Spain. A trip to Andalucía would not be complete without a visit to the Nerja Caves, one of Spain’s most popular and spectacular historical sites. The magnificent Nerja Caves – Cuevas de Nerja – are a series of huge caverns and home to the world’s largest stalagmite, a 32 metre high column measuring 13 metres by 7 metres at its base.

There are three Galleries – Show Gallery, Upper Gallery and New Gallery – with each gallery containing a number of Halls.

The Upper Gallery and New Gallery contain many of the prehistoric cave paintings, but tourist access to these areas is limited to special groups.

On January 12th 1959, five local lads from the village of Maro decided to go hunting for bats and headed for a pothole known locally as ‘La Mina’ where they spent the night watching a great number of these creatures exiting through the hole in the rocks.

The boys decided to return the next day, taking with them some tools to dislodge a couple of stalagtites in the entrance. Once inside, they found themselves able to descend to a huge cavern where they discovered a number of skeletons next to some ceramic pottery.

Excited by their find, they went back to tell their family, friends and teachers but it wasn’t until the cave was visited by a medical expert and a photographer that the true extent of their discovery became apparent.

The first photographs of the caves were published in the Málaga newspaper ‘Sur’ about 100 days after their discovery and after first being called ‘Cueva de las Maravillas’, they then became ‘Cueva de Nerja’.

The Nerja Caves were officially inaugurated on June 12th 1960 and opened to the public.

During the period January to March 2014, visitors to the Nerja Caves can take advantage of a guided tour of the Caves at no extra cost. The tours, in Spanish, take place daily at 13:00.

The Nerja Caves also offers a special experience for visitors, with groups of up to fifty people able to enjoy a guided tour of the caverns in the company of actor Miguel Joven, famous for his role as ‘Tito’ in the popular TV series Verano Azul.

These special visits will be daily. As well as learning all about the caves and its early inhabitants, visitors will be treated to a series of anecdotes from Miguel Joven relating to the filming of one of the episodes of Verano Azul which took place inside the caves. There is also the possibility of combining a visit to the caves with a lunch or dinner at the Nerja Caves Restaurant. These special guided visits can be booked online via the Nerja Caves website: www.cuevadenerja.es Getting To Nerja Caves

If you’re driving just follow the main coast road (Avda Pescia) east out of town until you come to the roundabout just after the sugar mill that you’ll see on your left.

The caves are well sign posted from here and there’s plenty parking once you get there. There are plenty buses running along Avenida Pesca to the caves (check latest timetable locally).

Many visitors who have the fitness enjoy the 4km walk to the caves, returning by bus. Just follow Avenida Pesca beyond the entrance to Capistrano Village along the old coast road.

Beyond the plastic greenhouses you’ll come to the abandoned San Joaquin sugar mill which dates back to 1884 when it was built to process sugar cane.

Beyond the roundabout you’ll also see the Eagle Aqueduct which was built to provide water to the sugar mill. Today local farmers still use it for irrigation but maybe not for long as there are plans to construct a golf course on this terrain.

Please note that the Nerja Caves close at lunchtime all year round from 2pm to 4pm. Unfortunately, I’ve been caught out by this one when visiting with clients!

If you are there between 2pm and 4pm there’s a very nicely located bar/restaurant serving a buffet lunch with an excellent terrace offering stunning views out to sea and towards Nerja.

Spanish Caves Information How about some Adventure