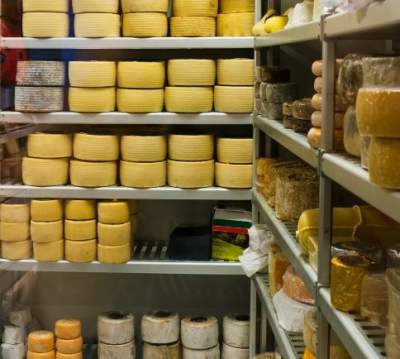 Cheese Spain Cheese lovers information on a selection of Local Spanish cheeses from all over the Spanish area. Cheesy recipe books for fans of such. 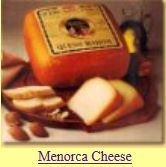 Menorca Cheese
Mahon
Also known as ‘Minorcan’ cheese, this fresh product is made on the Balearic Islands with raw or pasteurised cow’s milk from the Frisian, ‘Mahonesa’ or ‘Minorcan’, or the Alpine Brown breeds. Valdeon Blue Cheese from Leon Valdeon is one of the best known Spanish blue cheeses, from Leon, high in the Picos de Europa mountains. (D.O. Valdeon) Made from a mixture of unpasteurised goat, cows and ewes milk.

Drunken Goat cheese so called because it takes a bath in some red wine for a couple of days while being produced. La Mancha Cheese from Manchego in Spain
La Mancha Manchego has a firm and compact consistency and a buttery texture.The colour of the cheese varies from white to ivory-yellow, and the inedible rind from yellow to brownish beige Spanish Idiazabal cheese from the Basque area of Spain
Spanish Idiazabal is produced in the shape of a cylinder, with a smooth and hard natural rind that is pale yellow to amber in colour.Theproduct has a compact texture, with a few pinprick holes. It is dry, but not crumbly, and feels pleasantly oily in the mouth. Spanish Goats Cheese selection
Goat Cheese from Spain Try Goats with paprika or Goat with Rosemary or perhaps a Hamper from Spain. All of the milk used in the production of Cabrales comes exclusively from herds raised in a small zone of production in Asturias, in the mountains of the Picos de Europa. This is an ideal present

A wide variety of cow breeds are found in different regions of Spain. From each breed of cow’s milk has a unique taste to it.

Some of the popular Spanish cheese types in this category are Tetilla, San Simon, Arzua-Ulloa and Mahón. These are available in soft, fully cured and semi cured types. Their color and texture depends on the curing time.

Mahon is a unique type in this category because herbs are used to thicken milk.

Murcia al Vino, Montsec, Ibores and Majorero are some of the well known Spanish goat’s milk cheeses. Murcia al Vino is special because it is made out of fragrant milk produced by Murcian goat.

Ones in this category are creamy and spicy. Spicy taste comes from paprika or corn meal and has a hint of almond and honey as in Majorero. Color of these cheeses may vary from white to yellow as they are sometimes cured.

All special Spanish types can be identified with their blue color. Cabrales, Picón and Valdeon are made out of a mixture of two or more types of animal milk.

The specialty of these is that they are cured in caves for months. They are tangy to taste and have soft and creamy texture.