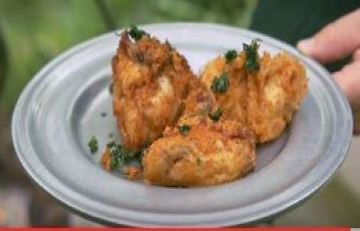 ABOVE THE STOVE – Spanish Fried Chicken

Chef Mia shows us how to create your favorite Spanish Fried Chicken!

Pollo al ajillo is a delectable and easy Spanish chicken dish, loaded with flavour thanks to simple ingredients like garlic and white wine.

You don’t need a special trip to the market to find the ingredients for this authentic Spanish recipe – they’re probably already in your kitchen!

A whole chicken is jointed, dredged in flour and browned in olive oil. Garlic, basil and white wine are added to the pan, resulting in chicken that’s moist and delicious.

Find this Spanish recipe and loads more on Allrecipes.co.uk, the UK and Ireland’s largest online community of home cooks:

For the lovers of those awesome Mediterranean flavours, this chicken dish will leave you wanting more once it explodeson your taste, so maybe triple this recipe.

I used chicken thighs for this Spanish style chicken, as they are so much more flavourful and they stay quite juicy when cooked longer.

The potatoes are cut medium thin using a knife, and alternating each potato slice with a slice of chorizo, roasted in the oven with a little thyme and olive oil.

They absorb the smoky flavour and soak up the fats from the chorizo and develop crispy edges making those alone enough to die for.

There’s a little more involved in this recipe but believe me it’s well worth it. Enjoy this Spanish Style Chicken.

Fried chicken is traditionally thought of as an American classic. Many Americans have put their spin on the popular food dish.

From fast food chains like KFC to fancy restaurants, everyone has their version of fried chicken.

But Jonathan Townsend dug up a recipe for fried chicken that dates back from before America was a country.

He found the recipe in an old English cookbook dating back to the 18th century – Nathan Bailey’s 1736 cookbook, Dictionarium Domesticum.

The recipe has many of the ingredients for modern fried chicken. It all starts with the marinating the chicken for three hours in a mixture of lemon juice, malt vinegar, salt, pepper, ground clove, green onions, and bay leaves.

The batter includes flour, white wine, egg yolks, and salt. Once the chicken is done marinating, it is coated in the thin batter and fried until a light brown color. The last touch is to add some fried parsley.

As for frying oil, the recipe doesn’t specify what kind, although it was probably lard. But Townsend says you can use the oil of your choice.

Next time you cook fried chicken, you might want to try this “old-fashioned” recipe from the 18th century a try! It looks delicious!

The 280-year-old recipe didn’t outline exact measurements, so the amounts listed below are approximates:

In a separate bowl, add flour and mix in a little bit of wine until batter reaches consistency of thin pancake batter.
Add in egg yolks and 1 teaspoon salt until batter is smooth and even.

Remove chicken from marinade and coat in batter. Heat pot of oil to 350F.

Carefully place chicken in oil and cook until crisp and golden mahogany brown. After the chicken is cooked, add parsley into hot oil until crisp. Sprinkle parsley over chicken as garnish.

Share this authentic and historic recipe with your friends and family!
Read more at http://www.reshareworthy.com/18th-century-fried-chicken/#CPPZJZW6VM3o3Ph4.99

Fried chicken is comfort food at its finest.

Served alongside a biscuit, atop waffles, or just on its own, fried chicken is one of the most universally loved foods around.

In Fried Chicken, Southern chef Rebecca Lang collects 50 of the most tantalizing, crowd-pleasing variations on the classic.

All of these recipes are impeccably tested, foolproof, and will have the whole family singing the praises of perfectly fried poultry.

THEY DO DELIVER TO MAINLAND SPAIN.

Spanish easy-to-followAioli video recipesAioli is a lovely fragrant type of mayonnaise that perfectly compliments fish,
seafood, chicken or pork,
give these aioli video recipes
a try this for yourself.