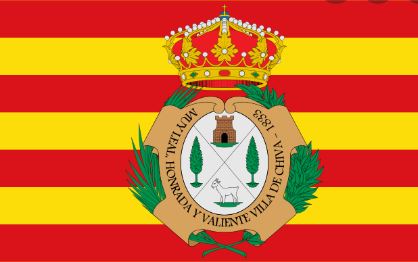 Chiva Fiesta del Torico festival is well worth a visit due to its unusual proceedings. Keep in mind that the Chiva bull is not sacrificed nor led to a bullring afterwards to be part of a bullfight

Chiva is said to be full of Lion’s Heads and Bulls It is located at the point of contact between the mountain and the plain, at the foot of the Loma del Castillo, at 270m above the sea. Chiva, capital of the region Chiva-Hoya de Bunol

ON THE Font del Torica in Chiva’s Plaza de la Constitucion, with its twenty one lion’s heads spouting a constant stream of water, is a plaque depicting the Torico de la Cuerda, part of the fiesta held in the last two weeks of August in which brave (or foolhardy) young men try to grab a rope tied around the head of a charging bull to direct its movements.

The fiesta is thought to have begun in 1765 when a bull was auctioned by the Clavarios of san Roque to fund the construction of a temple.

The bull itself was supposedly provided by cattle dealers from Teruel as payment to the municipality for winter grazing rights. Like most other fiestas, though, there are plenty of other suggestions as to how it originated, depending on which historian you talk to.

Behind the font is a large pond that seems to fulfil no function other than to gather soggy plastic bags and provide a home for a couple of waddling geese, although on closer inspection you see a number of large fish swimming around in its murky depths. Houses back directly onto the pond rather like a poor, latter-day Venice.

Remains from the Iron Age have been found in the surrounding hillsides (now in the Mueseo de Prehistoria in Valencia) but the town’s origins are Moorish, as can be seen from its narrow twisting streets. Chiva almost ceased to exist at all when King Filipe III ordered the banishment of all Morisco’s (Moors who had converted to Christianity) from Spain.

There were so few people left that thirty-eight people were brought in to keep the town alive.

(This happened in many villages in the Valencian Community, which accounts for some of the strange accents and village names, such as in Tarbena where the village was repopulated from people from Mallorca).

Chiva is a pleasant little town to wander around but apart from a collection of paintings by Jose Vergara and sculptures by his brother Ignacio in the parish church, and the hilltop sanctuary of the Virgen del Castillo, there isn’t a great deal for the visitor to see.

La Orza de Angel
Chiva
Rooms in the Orza de Angel all have hydromassage showers and large flat-screen satellite TVs. It is located just outside Chiva, only 5 km from the Circuit de Valencia racetrack. More

The air-conditioned rooms in La Orza de Angel have free Wi-Fi and hairdryers. All have tiled floors and large windows.

The property’s traditional restaurant offers classic Spanish and Valencian dishes in a tranquil atmosphere. There is also a modern bar decorated with hand-painted tiles, and the property’s shop sells local wines.

The A-3 motorway is about 1 km away, and the city of Valencia can be reached in about 20 minutes by car.

The Sociadad de Socorros Mutuos (the local casino) on Calle Antonio Machado was built in 1883, and is a great barn of a place with tiled walls and marble topped tables where old chaps gather, heads bowed in concentration over draughts boards.

Four enormous paintings of rural activities cover most of the walls above the beautiful Modernista tiles, but are so layered with nicotine that you can barely make out the subject.

The back of the building (along with most of the street) hangs over the dry river bed in a casa colgada-ish way without being quite as fearful as the hanging houses of Cuenca.

The river bed itself could do with a bit of a clean up.

On a hill above the town, in the direction of Madrid, is the Santuario de la Virgen del Castillo.

The Santuario is only open during the hours of Mass but it is worth climbing the hill just to enjoy the panoramic views of the surrounding countryside that varies from rolling olive groves and stately pine covered hills to industrial estates.

On clear days they say you can see the distant Mediterranean. Nearby are the ruins of the Castillo, said to be of Roman and Moorish origin.