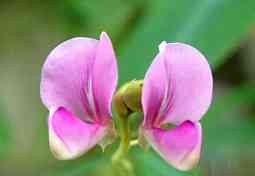 Dance Plant Have you ever watched a plant move all by itself? The unusual Desmodium gyrans, also known as the ‘Dance plant’, is another of the few plants in the world that visibly – and quickly – moves its leaves when exposed to touch, sunlight, warmth or even small vibrations – hence the reaction to music and sound.  Spanish Gardening Books selection

When the plant finally “goes to sleep” at night, the leaves droop downwards. This plant is famous for being a favourite of Charles Darwin and is featured in depth in his book ‘The Power of Movement in Plants’, his final work before he died. He had started studying the Dancing plant years earlier, having obtained a sample from his friend Sir Joseph Hooker who had collected specimens in the northeast Indian state of Sikkim.

In 1873 Darwin excitedly wrote to Hooker: “Now I want to tell you, for my own pleasure, about the movements of Desmodium…

The little leaflets never go to sleep, and this seems to me very odd; they are at their games of play as late as 11 o’clock at night and probably later.” Dance plant asleep Dance plant Darwin didn’t seem to notice the response to sound, but thought the twitching reflex was in response to drops of water which he had sprayed on it, rather like shrugging off a cold shower.

However its affinity with music certainly seems to be well documented. Nomenclature: Desmodium gyrans has later been renamed as Codariocalyx motorius, both names reflecting this plant’s talent for movement visible to the naked eye.

Besides ‘Dancing plant’, other common names include ‘Telegraph plant’ and ‘Semaphore plant’ after the leaf movements, which resemble semaphore signals or Morse code. Description: Desmodium gyrans is a perennial, leguminous shrub, part of the Fabaceae family.

To be honest, it is nothing special to look at, until you look more closely and do a bit of reading up.

It is native to tropical Asia and earns the name from its habit of rotating and jerking its leaves on their axes.

The foliage is very simple; it has a very airy look to it with delicate stems that bear the leaves.

The leaves are attached to the stem in an odd way, almost jointed, both at the very base of the leaf and where the leaf joins the stem.

This makes them floppy and quite unlike normal leaves.

Each leaf distinctively sprouts two miniature “satellite” leaves near the stem, which serve as sun samplers to help determine optimal position in regards to available sunlight.

Mature dance plants reach heights of about 5 feet tall. It is a fascinating plant, perfect for children to grow and have fun with – the plants really do “dance” in their own way in response to sound. Culture: These lively tropical plants must be kept warm as they are not winter hardy and are prone to freezing.

Flowering Dancing plants flourishes in temperatures ranging from 22 to 35°C (71 to 95°F). They grow just fine in containers. Plants thrive in full sun and tolerate conditions of partial shade.

They grow best in nutrient-rich, well-drained soils, though being a member of the pea family, they have the ability to fix nitrogen from the air and are therefore adaptable to most soil types, including those of poor quality.

Keep the soil moist in warm seasons, but avoid over-watering during the cool seasons. Dancing plants generally are easy to grow and require little maintenance from owners. Sowing Dance Plant seeds:
Seeds can be sown indoors at any time of year.

Soak the seeds in a container of warm water for a day or two before planting the seeds at a depth of 1 cm (3/8 in).

Then cover the container or pots with clear plastic wrap or lid and place them in a warm place. Ideal germination temperatures are 24 to 27°C (75 to 80°F).

Germination of the seeds can start in 10 days, with the majority germinating in 30 days. They may take up to 90 days, so don’t be discouraged.
dance plant
20 seeds of Dancing Plant Codariocalyx motorius (Syn. Desmodium gyrans)

Cultivation:
Remove the plastic cover once they have germinated.

The seedling leaves will not move, but about three weeks later, real leaves will appear that will.

The soil must be kept consistently moist, without drying out between watering. Once the seedlings are well established, the plants can be transplanted to bigger pots. Of Interest:
This extraordinary plant came incredibly close to extinction, but recent research by Dr. Pradit Kampermpool at the Kampermpool’s plant nursery in Udon Thani Province, in tropical northern Thailand, has secured the continued existence.

This tropical flowering shrub adds a fascinating and beautiful conversation piece to any garden,  makes an attractive houseplant, and will give dancing displays on a sunny windowsill.

Somewhere I read it likes the Grateful Dead, in other places that it responded better to “muzak” than heavy rock. It seems music is a personal choice for plants too…
Dancing plant in flower.

Not so innocent now, vegetarians.