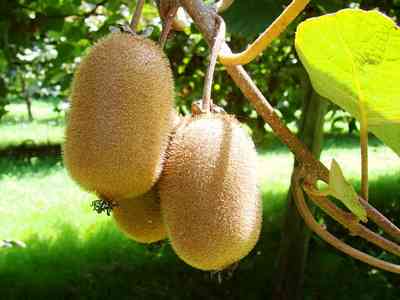 kiwi fruit Kiwi tree fruits were introduced to the western world at the beginning of the 20th century. Selection of Spanish Gardening guides for you.

Ever thought that kiwi fruit hailed from New Zealand and grew on a tree or shrub?

Guess again because the green fruit with the black seeds actually originates from China, were known as gooseberries and grow on a vine!

Their scientific name is Actinidia deliciosa and they originate from Southern China, where they were known as Yang Tao (sunny peach) or Mihou Tao (macaque peach).

In fact, in China they are still considered the national fruit.

They were introduced to the western world at the beginning of the 20th century when the missionary Isabel Frasier brought them with her back to New Zealand after visiting missions in China.

Early nurserymen in New Zealand, such as Alexander Allison, Bruno Just, and Hayward Wright, recognized the potential of the fruit and it soon became a popular backyard vine.

It was not until the 1940s commercial planting began. Initially, Kiwi fruits were known as “Chinese gooseberries” because of their visual resemblance to gooseberries (They do not belong to the same genus as gooseberries, though).

The fruit was renamed for export marketing reasons in the 1950s; briefly to melonette, and then later by New Zealand exporters to kiwi fruit.

The fruit is borne on a vigorous, woody, twining vine or climbing shrub.

In cultivation it is supported on a trellising system.

In general, the vines put out new leaves in mid-March, bloom in early May and the fruit ripens in November after the leaves have fallen.

With a few exceptions, the plants are normally dioecious, meaning individual plants can be either male or female.

Only female plants bear fruit, and only when pollinated by a male plant.

The flowers are mostly insect-pollinated, but because the flowers are not very attractive to bees, it may be necessary for the home-grower to blow or dust collected pollen over the female flowers.
Culture of the Fruit.

Kiwi plants will tolerate part shade but prefer a sunny location where they can ramble across some type of trellising system.

The vines should be protected from strong winds as spring gusts can snap off new growth where it emerges from the canes.

Kiwi plants need at least 240 frost-free days, and they seem pretty susceptible to sudden drops in temperature in early autumn or late winter.

They can withstand a temperature of about -12° C (10° F) when fully dormant, but they are still vulnerable to sudden lower temperature and must acclimate slowly.

Generally, where peaches, almonds and citrus thrive, so do kiwi fruits.

All cultivars need a certain period of winter chilling and their needs vary dramatically, dependent upon cultivar.

The soil should be acidic, with a pH of about 5 – 6.5, rich in organic matter and not too salty.

If the soil is too basic, leaves will show nitrogen deficiency.

Kiwi fruit plants need large volumes of water during the entire growing season but must also be in well-drained soils.

Watering regularly in the heat of the summer is a must. Never allow a plant to undergo drought stress.

Symptoms of drought stress drooping leaves, browning of the leaves around the edges, and complete defoliation with re-growth of new shoots when the stress is continuous.

More plants probably die from water related problems than any other reason.

The Vines also need a lot of nitrogen, especially in the early season, so add a nitrogen-rich fertilizer early on.

Adding nitrogen in late season may cause the fruit to store poorly, so avoid overdoing it. Early fertilizations can be done with an avocado tree fertilizer, while watering well, around March.

Subsequent fertilization can be done in early summer. Mulching is also recommended, using manure or straw, but the mulch should not come in direct contact with the vine.

ines require vigorous (winter) pruning, similar to that of grapevines.

Fruit is borne on one-year-old and older canes, but production declines as each cane ages.

Canes should be pruned off and replaced after their third year.

Pests and diseases not a big problem to kiwi fruit plants. However, the plant attracts animals like cats (that love to rub against new shoots, damaging them), deer, garden snails and gophers.

Be wary of root-rot nematodes that may weaken the plant, especially in its young stage.

Fruit and harvest of Kiwi Fruit

The fruit consists of a hairy, brown peel containing green flesh, with white pulp in the center, surrounded by black, edible seeds.

The fruit has a sweet taste, similar to a mixture of banana, pineapple and strawberry.

Kiwi fruit should be harvested around mid-November, when the seeds become completely black.

Once harvested, place the hard fruit into plastic bags and put into the refrigerator for keeping.

When needed, the fruit can be taken out of the refrigerator and ripened on the counter for a few days in a plastic bag. Well stored fruit can last for several months.

Nutrition-wise, kiwi fruits being rich in many vitamins, flavonoids and minerals. In particular, they contain a high amount of vitamin C (more than oranges), as much potassium as bananas and a good amount of beta-carotene.

Raw kiwi fruit is also rich in the protein-dissolving enzyme “actinidin” which is commercially useful as a meat tenderizer.

In the home kitchen, meat can be tenderized by placing slices of kiwi fruit over it or by rubbing the meat with the flesh.

After 10 minutes the fruit must be lifted or scraped off, otherwise the enzymatic action will be excessive. The meat should then be cooked immediately.

Please be aware that kiwi fruits can be allergic to some individuals because of the actinidin. The most common symptoms include itching of the mouth, lips and palate, but can range to a more severe level such as wheezing or collapsing.

But there is nothing on earth like kiwi fruit – brown and fuzzy on the outside, green and zesty on the inside. Enjoy the benefits of this delicious fruit and its festival of flavour…