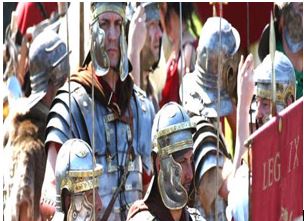 The Eagle Has Fallen The 9th Roman Legion first raised in Cordoba Spain  A crack unit with Moto Born By Caesar baptised in blood crowned in glory. A few copies of the ORIGINAL book are available CLICK HERE.

https://spain-info.co.uk/costa-blanca/orihuela/
This is the story of Rome’s most mysterious vanished legion. The legion which disappeared from the history books and was lost without trace.

For 2,000 years historians have debated the the fate of the Ninth Legion who were stationed in York, Britain.

Its disappearance has become one of the greatest unsolved mysteries of the Roman Empire.

In 117 AD the Roman Empire was at its peak. Its territory stretched from Southern Scotland to North Africa, from Spain to Judea. It contained around 100 million people.

The Roman’s controlled the empire with twenty eight legions of soldiers. Each legion contained around five thousand men and they were based around the major centres of population across the known world.

At this time one of the Roman legions went missing. The Ninth Legion, based in York, Britain were one of the best legions in the entire Roman Army.

Its disappearance is one of the greatest unsolved mysteries in the World.

“The Eagle Has Fallen” is an unravelling of that mystery. We reveal how the loss of the Ninth Legion was a truly catastrophic event: the devastating news was suppressed by Hadrian to safeguard his reign.

It was the first in a chain reaction of disasters which forced Rome to halt expansion and to create the largest frontier wall ever built in the Roman Empire. Written sources and new archaeology indicate where the Ninth met its end in the lands of northern Britain.

Author Brian Young has spent some six years researching and writing about this incredible mystery. He describes his novel as “faction” – based on 80 per cent facts and 20 per cent fiction.

Following on from two recent movies, “The Eagle” and “Centurion”, there is enormous fresh interest in the disappearance of the Ninth Legion. This is the story of Romes most mysterious vanished Legion.

Why did Hadrian rush to Britain with over 18,000 men and build the greatest Roman frontier barrier across Northern Britain?
What happened to the Ninth legion?

SETTING THE SCENE FOR “THE EAGLE HAS FALLEN” . . .

For 2,000 years historians have debated the the fate of the Ninth Legion who were stationed in York, Eboracum. Of the three Legions based in Britain, the Ninth were responsible for keeping the peace amongst the most feared British tribe; the Brigantes.

“The Eagle Has Fallen” is written as a re-collection of the events surrounding what happened in Britain and the rest of the Roman Empire, when Hadrian came to power in 117AD.

The World was not such big a place to Rome. World domination was a possibility.

So why did Hadrian order the construction of the largest boundary in the Roman Empire?
What made the historians of the day comment ‘the Britons could not be kept under Roman control’?
And what happened to the Ninth Legion in York?

Above Author Brian Young with re enactment society Romans.

AUTHOR BRIAN Young believes he has unravelled one of the greatest mysteries of the Roman Empire – the disappearance of the Ninth Legion in the north of Britain.

His best-selling novel “The Eagle has Fallen” took six years to research and write and the NHS engineer said: “I wrote it as accurately as possible.

About 80% or the characters and 80% of the story are based on real events but it needed a little artistic licence.”

Speaking at his holiday home in Polop, he said the Ninth – a 5,000-strong unit – was ordered from its garrison at York to quell an uprising of the Brigantes, a tribe of Britons with a homeland stretching from Scotland to modern day Liverpool.

The fate of the legion has intrigued historians and archaeologists for years.  It’s loss has been blamed on a catastrophic military defeat to a supernatural vanishing.  Brian believes the Ninth Legion was ambushed.

I am not saying the whole of the legion was wiped out, it is entirely possible some soldiers survived,” he said.  “There is no direct evidence the Ninth left Britain but because of politics I believe the loss of the Ninth was covered up and smoothed over.”

And he said if the Ninth’s Eagle was lost in battle, the unit would never have been reformed.  “If you lost your eagle it was an absolute disgrace.”

The Eagle Has Fallen.True Story of the Ninth Legion

You can order a copy of the book by clicking above.

commented on your post on facebook: “The last sight of the legion was at what is today castle hill in Huddersfield. Furthermore, there’s documental evidence that some of the officers where stationed in north Africa after the event of the The loss of the eagle and decimation meted out by Rome.”

You can order a copy of the book by clicking above.

commented on your post on facebook: “The last sight of the legion was at what is today castle hill in Huddersfield. Furthermore, there’s documental evidence that some of the officers where stationed in north Africa after the event of the The loss of the eagle and decimation meted out by Rome.”