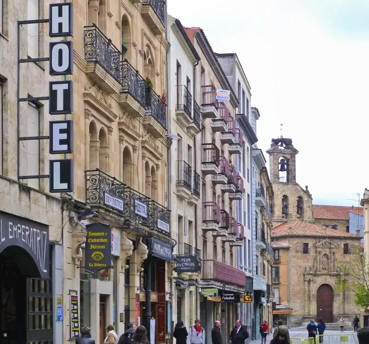 Salamanca is university city that has a great nightlife for those of you looking to have fun. Come and discover all that is there to see and do in Salamanca, Spain!

This city boasts Spain’s grandest plaza, its oldest university, and a fascinating history, all swaddled in a strolling, college-town ambience.
Salamanca is a series of monuments and clusters of cloisters.

Plaza Mayor is the ultimate Spanish plaza. It houses the town hall and it is the community’s living room. It is the most important place in town.
Bullfigths were held in the square.

Its Old City was declared a Unesco World Heritage site in 1988.

Casa de las Conchas is a historial building that currently houses a public library. its facade is decorated with shells, symbol of the order of Santiago as well as of teh pilgrims performing the Way of St James.

The Roman Bridge of Salamanca is from the 1st century BC

Situated in the heart of the historical and beautiful city of Salamanca, Petit Palace Las Torres Salamanca is within easy walking distance of the cathedral and the university. More… Hotels in Salamanca

Salamanca is the center for language schools for students wishing to study Spanish in Spain. There are many to choose from, ranging from the University of Salamanca – Cursos Internacionales, to many private schools such as the Academia don Quijote.

The Secret of Salamanca: 3 (Domingo Armada)

Domingo Armada is back! This time to investigate the brutal killing of a professor in the ancient university town of Salamanca. The man’s death comes just before a contentious student election to determine if he is to be promoted, an election that is historically rife with bribery, kidnapping, and violence.

Armada and Lucas begin to sort through a university full of suspects only to discover the victim was leading a double life, one that hinges around a secret stashed away under Salamanca’s famed Old Roman Bridge. A secret so explosive, someone is willing to kill to keep it hidden.

The Secret of Salamanca is the next thrilling mystery in the Domingo Armada series of historical murder-mysteries that bring Spanish history to life, with plenty of twists and turns to keep you guessing until the very end!