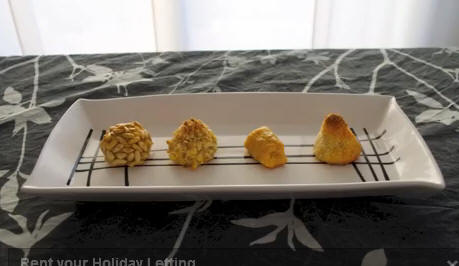 Panellets Sweet Potatoes Recipes From Spain watch the videos they will give you useful information. Sweet Potato Cook Books

On 1st November it’s also a bank holiday in Spain, it’s now common to make some celebrations based on Halloween (or at least what we know about Halloween from TV and movies) like wearing like zombie on party, or kids asking for trick or treat on some homes.

But it’s more common (at least in Catalania) to eat sweet potatoes or chestnuts roasted, with lot of places in the street offering them to you.

Also is very traditional to buy panellets in bakeries, and this is the recipe I present to you today. They are absolutely delicious, easy to prepare, but they are not quick to cook.

So lets lets start boiling one sweet potato or regular potato in water for about half hour.

Add to the bowl lemon zest, ½ kg of icing sugar, ½ kg of ground almonds, a few drops of vanilla, and a whisked egg. Mix well everything until you obtain an homogeneous dough, then wrap it in transparent film and let rest in the fridge one night.

Next day divide the dough in 2, with one of the parts make small balls and reserve them.

Divide again the remaining dough in two, to one of the parts add ground coconut, mix well and make a cylinder with the dough, cut in small pieces and with your hands give each piece conical shape.

Add some flour on the surface you’re working and form a cylinder with the remaining dough, flatten the dough and place strips of quince all along the dough, then wrap the quince with the dough and cut in small pieces.

Just pass the quince panellets through the whisked egg. And with the coconut panellets pass each conical piece through egg and then spread ground coconut over them.

Finally before baking paint the almond and pine seeds panellets with whisked egg. Bake in the oven at 350ºF (180ºC) for 18 minutes and then let rest at least 2 hours before eating them.

Music played in the video (Airport Lounge) was composed by Kevin MacLeod (http://incompetech.com), also he is the owner of song’s rights which are released under a CC-BY license.

His message couldn’t be simpler – use fresh, good-quality, seasonal ingredients and they will speak for themselves.

Season by season, he explores his favourite ingredients from different Spanish regions (illustrated with beautiful location photography), the culture and history behind them and how best to use them with his exceptional recipes.

With anecdotes about typical Spanish pastimes and stories from his youth growing up on a farm in Extremadura, this is a truly Spanish approach to the cuisine, which has integrity and charm.

Try a Pea Soup with Serrano Ham to welcome spring, add extra virgin olive oil, lime juice and black pepper to the most ripe of summer fruits to bring out their flavour and create some authentic Spanish meatballs to warm you in winter – these are recipes that you will turn to again and again for any occasion.

Do you love Spanish cuisine so much that you want to learn how to cook it? Then, there is no better way to learn than to go on a cooking holiday in Spain.

Reserve yourself a spot on one of our many cooking vacations in Spain and become the culinary master you know you can be!http://spain-info.co.uk/cooking-spanish-style/

Sweets made the Spanish way