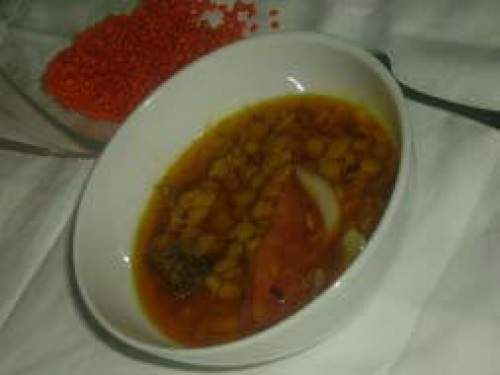 This lentil stew is a very simple one pot wonder that I grew up with that I make regularly and is a classic Spanish dish known as ‘potaje de lentejas’.

It is a Tasty Lentils staple dish in most homes in Gibraltar too. This is a vegetarian version (vegan actually!) of the dish which is healthier and keeps all the great taste.

This is my version of Lentils Stew a traditional Spanish dish called lentejas, or guiso de lentejas which translates to lentil stew, as is it more stew like than a soup.

It is a lentil stew recipe which was introduce to me by my wife, when we first met.

I was never into tasty lentil soup back then, but she really surprised me by how delicious this really is.

I have loved this Tasty Lentils dish ever since.

It’s super easy to make, and can be done in one pan, and just takes a little time.

Then, there is no better way to learn than to go on a cooking holiday in Spain. Select the destination of your choice and let some of the best Spanish chefs out there introduce you to creating some of the most delicious

Spanish dishes. Reserve yourself a spot on one of our many cooking vacations in Spain and become the culinary master you know you can be!