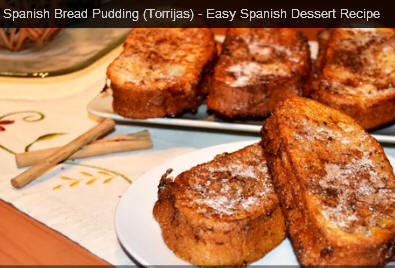 Deserts from Spain For your Afters

Spanish Deserts  Delicious Spanish desert and sweet recipes Look to see how the Spanish make them on these videos. My favorite Spanish Mediterranean desert recipes

Fried milk desert (Leche frita) is truly a Spanish classic desert recipe.its definitely worth a try if your looking for something different.

Infused with a hint of cinnamon, orange and lemon, this easy rice pudding brings a little bit of Spanish flavour to your kitchen – perfect for the depths of winter, when we need it most!

Find this recipe and loads more on Allrecipes.co.uk, the UK and Ireland’s largest online community of home cooks:

THIS IS WHERE YOU MIGHT Discover that SPECIAL wildlife and nature  holiday on a once in a lifetime Safari Tour in places such as Africa & the Middle East, The Americas & Caribbean, OR Asia & Oceania.===

Find and compare safaris and wildlife tours from 796 organizers worldwide!

Learn how to make a Spanish bread pudding or “torrijas”, a traditional Easter fare in Spain that consist of slices of stale bread soaked in milk and beaten egg, fried in vegetable oil and sprinkled with sugar and cinnamon powder (or honey if desired). This desert is absolutely delicious!

P.S.: We are not native speakers of English, so we apologize for any errors in this video.

Plus Cooking a pumpkin in the microwave is really fast and easy. Pop in a whole fresh pumpkin for 10-15 minutes and cut it right down the middle.

This is the best way if you wish to make pumpkin puree. from cooking deserts.

Spanish deserts Traditionally now what is eaten as an after