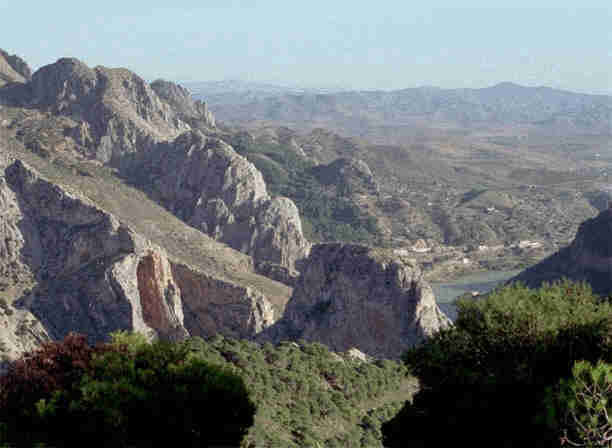 A guide to rock climbing in Spain’s Costa Blanca. A Warm Welcome to all interested in Climbing on the Costa Blanca

This video is incredible!  It’s a hike up El Chorro in Spain.  Be prepared to feel a bit uneasy in some parts.  Why?  The concrete paths, once quite good, are now in serious disrepair.

Yet the hiker moves on, from time to time, doing a balancing act as he places one foot in front of the other, navigating narrow railway-like ties, all that remain of some parts of the paths.

And he makes a point of showing us the dizzying heights.  One slip-up, and you would careen down thousands of meters, having time to think about your impending death.

Apparently, El Chorro is one of the most famous rock climbing areas in Europe.  With more than 650 bolted climbing routes in an area accessible on foot,

El Chorro is an “El Dorado” for climbers (or a “Whipsaw” for off-roaders).

Because of its location in  southern Spain, rock climbing is possible throughout the winter, though it can sometimes be cold and the paths snow-covered.

The routes are mostly hard climbs, which is why El Chorro attracts rock climbers  from the whole world.

Watch this video in full-screen! It is really worth it.

Rock Climbing in Spain Come Climb in the Sun!

Some of the best rock climbing you can find in Spain is in the Costa Blanca region on the east-coast.

Here you will find some of the finest bolted limestone crags in the country. With cheap flights and accommodation and a great climate for climbing it’s no surprise the Costa Blanca has become such a popular destination for rock climbers.

Benidorm offers holiday goers the beach, nightclubs, bars and all manners of distractions.

But for the climber, there are two main areas; the Sella crag has many variations of routes and is a great climb.

With 450 different routes over six crags, the Puig Campana is another popular choice, with a stunning setting you can’t go wrong. There are villas in Spain that are in a perfect location for the enthusiastic climber.

For the group climbers out there the crag of choice would be in Renaco, with a selection og fully bolted multi-pitch routes, you can’t go wrong.

When you get to Spain you need to make sure you have the best accommodation to meet your needs, a good place to rest after a long day climbing.

I would recommend hiring a car and finding a Villa in Moraira then you are central to all the best climbing locations on the east coast of Spain. Remember to visit the Gandia Area and the Xalo Valley if you run out of places to climb.

The area of Calpe includes the classic rock climber’s haven that is the Penon crag. Rising out of the sea, the spectacular 300 meter penon crag offers a superb choice of multi-pitch routes with almost 300 routes to choose from. You can choose from a great selection of Moraira Villas, you can really enjoy the trip and really get into some climbing.

Moraira sea cliffs are in a very embryonic stage of development, but nevertheless worth a visit.

There are a few routes at about 5-6c however the obvious potential is staggering. Imagine Kilnsey plonked on top of Beachy Head and that’s about the measure of it.

It is also a pleasant evenings walk just for a look-see. It’s situated about 15 minutes drive from Calpe. Just follow the directions in the Chris Craggs guide.

1.8 km from Guadalest village centre These heated apartments in Guadalest have a furnished balcony and offer wonderful views of Castell de Guadalest Castle.

There is a bar next door, which serves breakfast and lunch.

More There are shops, cafés and restaurants in Guadalest, and there is a drinks vending machine on site.

Guests can enjoy a wide range of outdoor activities in the surrounding area, including hiking, cycling or fishing.

La Font Roja and la Serra de Mariola Nature Reserve can be reached in about 35 minutes by car.

Some of the climbing is of true classic nature: Penon D’Ifach, a thousand foot solid lump of rock sticks straight up out of the sea and towers over Calpe, the beautiful valley of Sella where you can be surrounded by crisp limestone crags or the awesome Puig de Campana (how does 13 pitches sound?).

The area of Calpe includes the classic rock climber’s haven that is the Penon crag. Rising out of the sea, the spectacular 300 meter penon crag offers a superb choice of multi-pitch routes with almost 300 routes to choose from.

This has to be one of the classics of the Costa Blanca.

A huge limestone rock towering 1000ft up out of the sea. The view from the top has to be seen to be believed.

Now, you could walk up the tourist path but to get the real feeling for the moment it has to be climbed. rock climbing