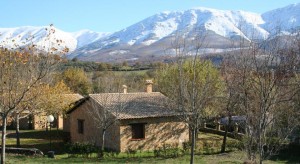 Bungalows Las Canadas are located in the Ambroz Valley, with easy access to the A66 Motorway. 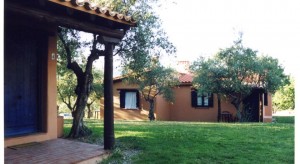 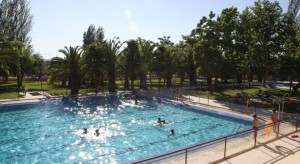 Set in the countryside just 2 km outside of Caceres, this site of wooden chalets provide the ideal setting for a family break in rural Extremadura. 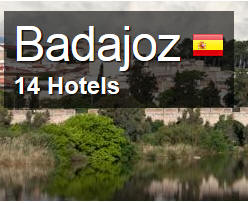 Click above for Discounted prices of Hotels and Guest Houses in Badajoz Spain.

The best ham in the world, the Pata Negra, comes from the Iberian Pork. Although they are very precious, the small black pigs are not barricaded in buildings as livestock and shepherded all day, but rather live carefree and pasture in holm oak forests — and of course eat acorns that give them that unique savour.

When driving out of the city and entering the countryside or undertaking a walking tour, you will see herds of small black pigs.

This breed is older than the European species and is accustomed to living outdoors.

The Iberian pig lives in Extremadura in holm and cork oak forests and feeds on their fruits in what is an interaction between the 2,000-year-old natural resources of the country, namely the Dehesa and the Iberian pig.

The Dehesa makes up more than one million hectares in Extremadura, and the western border region consists of half the whole Spanish Dehesa.

A quarter of the total area the self-governed region is covered by holm and cork oak forests.

Although the Dehesa looks like a virgin landscape it was generated by human action, for about 4,000 years ago Iberian tribes started clearing forest areas in the view today in Monfragüe’s National Park, making way for extensive pasture farming.

In the cleared areas they planted holms, whose fruit happened to be the perfect food for the pigs. The Dehesa represents an ecosystem that is unique worldwide, and this is not only because of its age.

A study dating back to the 1980´s showed that in addition to holms oaks there are another 45 plant species such as bluebells and iris. The Dehesa is also the home of a dozen singing bird species like squills, bustards, little owls and storks.

Acorns and herbs that are the main nourishment of the Iberian pig guarantee the unique flavour and the superior quality of the Jamón ibérico.

The ham of Extremadura is one of the best in the world and has won all the top awards. It is known as Pata Negra in Spain.

Extremadura’s government had the “Dehesa de Extremadura” trademarked by the European Union in order to control the high quality standards and to prevent it from being counterfeited.

Of the best quality are the pigs that feed on acorns and herbs from the Dehesa and only live outdoors from October to April. Many visitors to Extremadura are willing to learn the Iberian way of breeding pigs in one of the villages around Jerez de los Caballeros in the southern outskirts of Extremadura.

Big pig breeding industries are established there and you can see delectable legs of pork hanging even in Bodegas.

You also see them dangling behind many of Zafra’s butcher shop windows. The butchers are pleased to explain to guests all about pig breeding, to let them have a taste and give recipes. Actually, the Cerdo ibérico can be eaten not only with white bread but also in many different ways, for instance as Tapas, with salads and with fry-ups.

Some restaurants propose “Vieiras con Jamón”, which is wrapped, seared slices of ham. It is served with salad and Guadiana’s red wine. A very good recipe for you to copy.