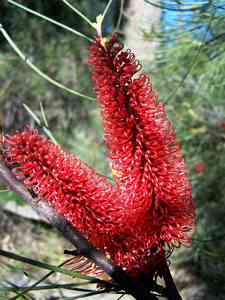 Hakeas Most hakeas are small to medium shrubs, but some can reach small tree proportions. Interesting books about Gardening in Spain

Hakeas are in the Proteaceae family, with banksias, grevilleas, waratahs and dryandras, and there are over 140 species within the genus.

Most  are small to medium shrubs, but some can reach small tree proportions.

Hakeas can be found in many different environments; the tropics, mountains, the coast and desert areas.

Although there are many ornamental and colourful species in the genus, hakea has not achieved the same popularity in cultivation as its relatives Grevillea and Banksia.

Hakeas are excellent garden plants and are useful for a number of purposes in the garden and the larger species, in particular, are excellent for screening.

In addition, the flowers of all hakeas produce nectar and are excellent for attracting birds.

They are a very diverse group of plants. Some hakeas have spidery flowers, like grevilleas, others have globe shaped inflorescences, while others look like an elongated spear at the end of the branches.

Many of the seed cases are also quite decorative having unusual shapes or they are rough with “bubbly” warts or tubercules which add interest and texture to a garden.

Many (but by no means all) hakeas have narrow, stiff leaves with sharp points which leads to common names such as “needle bush” and “needle points”.

This feature makes hakeas excellent plants for boundaries or places where it is desired to restrict access.

Hakeas generally flower in winter and spring and flower colours vary from white, cream, pink, red and pale blue. Many flower in profusion, some feature ornamental fruit while others are noted for fragrance.

The flowers are followed by hard, woody seed pods each containing two seeds and, in the majority of species, these pods remain tightly closed unless stimulated to open by heat, such as following a bushfire, or by the death of the plant.

The seeds themselves have a papery wing which allows them to be distributed by wind.

Those species native to areas where fires occur at regular intervals often have a “lignotuber”, a woody swelling at or below ground level from which regeneration of the plant can occur if the above ground stems are destroyed. 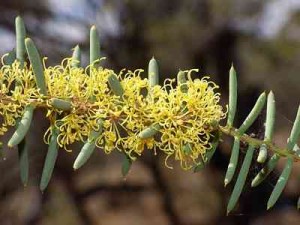 Most hakeas tolerate a wide range of soil and climate conditions. They grow well in sandy and clay loams, preferring a site in full sun or partial shade.

They need good drainage – that’s the most important thing. Water them until they get established.

When established they are really tough plants.

Like most members of the Protea family, they have a distinctive root system (proteoid roots) consisting of tight groupings of many small “rootlets”.

These are believed to enable the plants to more efficiently take up nutrients from the nutrient-deficient soils where many of the species occur naturally.

In cultivation this means that the plants can be adversely affected by fertilizers, particularly phosphorus.

So keep fertilizing to a minimum using only low-phosphorus, slow-release fertilizers or do not fertilize at all.
Hakeas-close
Hakeas-pruning

Hakeas respond well to regular, annual pruning where about one-third of the plant is removed.

This promotes branching and produces a neat and compact plant with a bushy shape.

Some plants can be cut back severely if they develop a “straggly” shape, but others will not tolerate this treatment. If in doubt, always leave some green foliage on the plant.

Unlike their close relatives, the grevilleas, hakeas come true to seed.

Just take a seed pod – use secateurs and gloves because they can be prickly – put it into a paper bag and put it onto the window sill of your car where it is hot.

The seed pods crack open, revealing the seeds. No pre-sowing treatment is required.

The seeds should be placed on a moist seed mix, covered lightly and kept moist.

Germination will vary from 15-100 days, depending on temperature and species. Initially seedlings emerge with their dark seed coat attached – most shed it quickly but it may be necessary to intervene gently to prevent misshapen stems. Then transplant them and they grow beautifully.
White
Hakeas-Bloom

Hakeas deserve to be grown more widely as they have such a range of garden uses and most are ornamental with striking flowers which attract nectar-feeding birds, insects and mammals.

The range and diversity of the Hakeas available means there will be one that’s sure to fit your garden.

West Australian Native Plants in Cultivation. This item can be delivered to your selected dispatch location in Spain – Mainland

Most are small to medium shrubs, but some can reach small tree proportions.