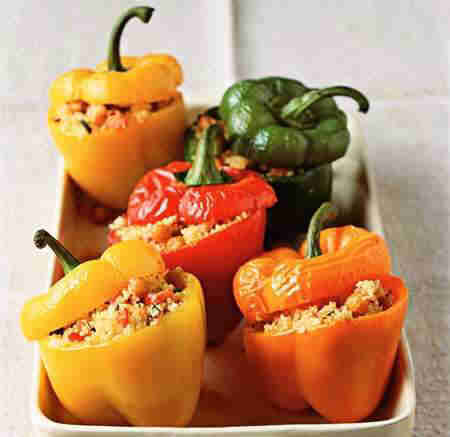 Bell peppers or sweet pepper is a cultivar group of the species Capsicum annuum (chili pepper).

While the bell pepper is a member of the Capsicum family, it is the only Capsicum that does not produce capsaicin, the chemical causing the strong burning sensation usually associated with the rest of the family.  Spanish Gardening Books selection

Bell peppers or sweet pepper is a cultivar group of the species Capsicum annuum (chili pepper).

While the bell pepper is a member of the Capsicum family, it is the only Capsicum that does not produce capsaicin, the chemical causing the strong burning sensation usually associated with the rest of the family.

Cultivars of the plant produce fruits in different colours, including red, yellow and orange.

The fruit is also frequently consumed in its unripe form, when the fruit is still green. Green peppers are less sweet and slightly more bitter than red, yellow or orange peppers.

The taste of ripe peppers can vary with growing conditions and post-harvest storage treatment; the sweetest are fruit allowed to ripen fully on the plant in full sunshine, while fruit harvested green and after-ripened in storage are less sweet.

Compared to green peppers, red peppers have more vitamins and nutrients and contain the antioxidant lycopene.

The level of carotene, another antioxidant, is nine times higher in red peppers. Red peppers also have twice the vitamin C content of green peppers.

They are juicy and sweet, and because they contain less than half the calories of an orange, orange bell peppers are perfect as a refreshing, low-calorie food, both raw or prepared in any dish.

Pepper seeds were later carried to Spain in 1493 and from there spread to other European, African and Asian countries.

Today, Mexico remains one of the major pepper producers in the world.

Besides tomatoes, peppers are one of the most commonly grown garden crops during the summer. Gardeners are just crazy about peppers.

So, with that in mind, here are a few tips to help you grow, healthy, robust, and flavourful peppers this summer:

This notebook of 150 lined pages awaits  your writing pleasure.   It can be your daily diary, a collection of random thoughts, a journal of your hopes and dreams, a “to-do” list, or even a “to-don’t” list!  The choice is all yours.  Enjoy!

Hi
This is an invitation to come and have a look at another Groups Facebook page. https://www.facebook.com/groups/1623745237901625/?fref=ts It is called Hints and tips about gardening in Spain. The pitfalls and the joys. Limited advertising is allowed provided it is on subject.