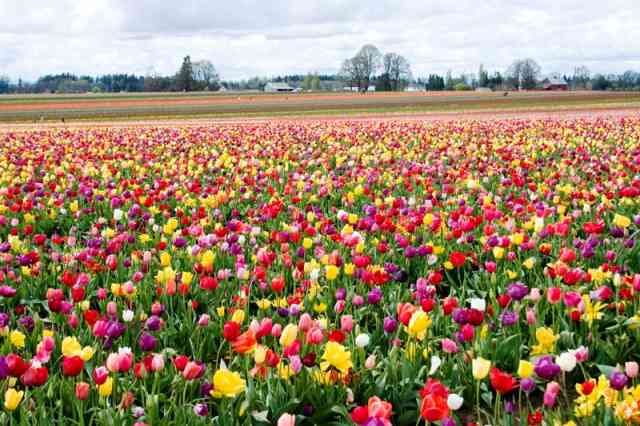 Although tulips are associated with Holland, they originate from southern Europe to central Asia. After being described in a letter by the Dutch ambassador in Turkey in the 16th century, who was also a great floral enthusiast, tulips were brought to Europe. . Selection of Spanish Gardening guides for you.

Cooking holidays in Spain, for all food lovers
Do you love Spanish cuisine so much that you want to learn how to cook it? Then, there is no better way to learn than to go on a local cooking holiday in Spain. Select the destination of your choice and let some of the best Spanish chefs out there introduce you to creating some of the most delicious Spanish dishes. Reserve yourself a spot on one of our many cooking vacations in Spain and become the culinary master you know you can be! 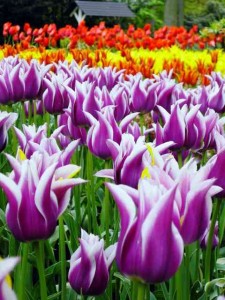 Spring flowering bulbs are all-time favourites in the garden. They provide colour and beauty to a dull winter garden until the summer shrubs and perennials burst into flower. They are one of the reasons I love spring so much. Bulbs do well in garden beds or in pots and you will be amazed by the range of colours.

There are many different types of bulbs to choose from, but (being Dutch) one of my personal favourites are tulips. The genus Tulipa contains around 100 species of bulbs, and is a member of the lily family. The flowers come in many different shapes and all colours except true blue. The world’s largest permanent display of tulips is in Keukenhof in the Netherlands, also known as “The most beautiful spring garden in the world”.

Although tulips are associated with Holland, they originate from southern Europe to central Asia. After being described in a letter by the Dutch ambassador in Turkey in the 16th century, who was also a great floral enthusiast, tulips were brought to Europe.

In Holland, between 1634 and 1637, the early enthusiasm for the new flowers triggered a speculative Gardening in Spain Tulipsfrenzy now known as the tulip mania – a period in which contract prices for bulbs of the newly-introduced tulip reached extraordinarily high levels and then suddenly collapsed. It is generally considered the first recorded speculative bubble, and the term “tulip mania” is often used metaphorically to refer to any large economic bubble (A fitting term for the Spanish real estate situation?).

When the frenzy of the tulip mania subsided, some of those who lost fortunes during this period of time found out through necessity what tribes people of Central Asia had long known: Tulip bulbs are edible (unlike bricks). 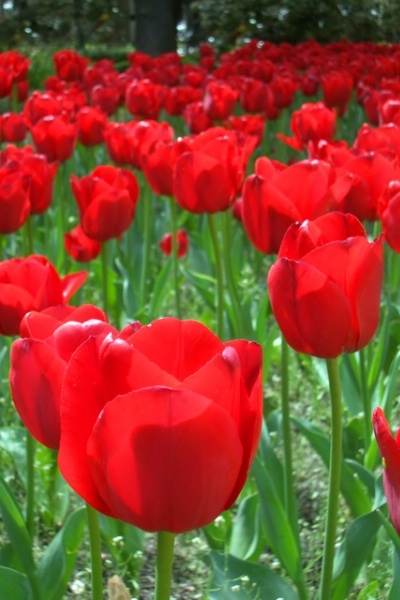 The bulbs can look deceptively delicate, but most are surprisingly hardy and easy to grow. When buying bulbs, go for healthy ones. Avoid any bulb that is diseased or physically damaged or has a bad smell. Look for bulbs that are firm and plump when you squeeze them. The outer skin of tulip bulbs is quite important because it helps to prevent dehydration and damage and should be intact. Bulbs also need to be a reasonable size to flower in their first year.

Spring-flowering bulbs are traditionally planted in autumn, but in warmer climates, tulips prefer to be planted when the weather and soils are a bit cooler. October – November is a good time, but they are really not fussy. However, it is important to remember that in our climate the winters usually do not get cold enough to initiate flowering, so they need to be given a short time in the fridge before planting. Between 4 and 8 weeks are usually enough, and somewhere like the crisper is ideal.

To plant, dig the soil over to get rid of any clods and weeds. You can dig individual holes or dig one big hole and then lay them out together. Just make sure you space them correctly. As a good general rule, plant at least twice as deep as the bulb is high, normally from 15 to 20 cm (6 to 8 in.) and about the same distance apart. Plant them with the pointy end up and water well once the foliage appears. 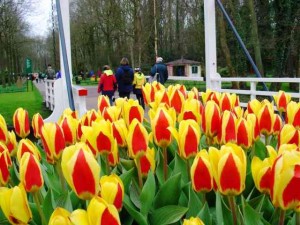 Tulip bulbs need very little attention except a complete bulb fertilizer at planting time, and then again Gardening in Spain Tulipswhen they have finished flowering. Simply sprinkle in a good bulb food and dig it through the soil before planting. A good bulb food often contains a lot of potassium and phosphorous to encourage a good display of flowers. You can also top dress existing clumps of bulbs that are already under ground with a bit of compost or organic fertilizer just to help them along.

They do best in an open sunny position or light shade and will flower poorly if they do not receive enough natural light. Good drainage is important. If you have heavy or poorly drained soil, try growing them in raised beds or pots. After flowering, as tempting as it is to cut off the dying foliage – don’t. The foliage helps to provide the energy for next years’ flower.

Tulips make an impressive display in bold groups, natural drifts beneath deciduous trees or just scattered around the garden at random. It is amazing to think that these small, dull, lifeless packages will burst into magnificence in spring – so get planting!