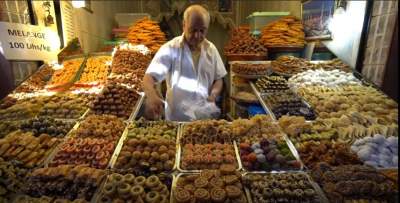 Marrakech Morocco walled medieval city dating to the Berber Empire it is a maze of alleys where thriving marketplaces that sell traditional textiles, pottery and jewellery.

Marrakech Come and enjoy a cooking holiday, they vary from three days up to eight days in Marrakesh in Morocco. Marrakech is berber origin and more Africaan than Arab. It has been the country’s capital on two occasions.

By clicking in you will find a selection of cooking holidays available in the Marrakesh area of Morocco.

Squarebreak – Apartment near a Golf Course

The unit is 3.9 km from El Badi Palace. More

Take a tour of Marrakech, Morocco – part of the World’s Greatest Attractions series by GeoBeats.

Hi, this is your host, Naomi. I would like to give you a tour of the top ten attractions of Marrakech, Morocco.

Number ten, Menara Gardens, is known for its historic architecture and hospitality. Menara Gardens established hundreds of years ago are a great reflections of this city’s beauty.

Number nine, Souks. Another name for bazaars or markets, these have been here for a long time. They offer festive atmosphere and local scene that’s a feast for the eyes.

Number eight, Morocco Gates. There are many striking gates along the city walls and palaces that have protected the city in the past.

Number seven, local food. Moroccan cuisines is popular all around the world. It’s very diverse due to the influences of many cultures on Morocco. The food containers here are just as appealing.

Number six in, Museum. Located inside a former gorgeous palace, which is remarkably well preserved, the museum houses traditional and contemporary Moroccan art.

Number five, in Marrakech Morocco carpets. Morocco Moroccan carpets are considered to be the finest in the world. If you have time for shopping, be sure to explore one of the many carpet shops in the city.

Number four, local streets. Walking in the narrow streets of Town is an excellent way to learn about how locals live today.

Number three, Koutoubia Mosque. This is the largest and most famous mosque in Marrakech City. Constructed in the 12th century, this stunning landmark dominates the city skyline.

Number two, El Bahia Palace. This beautiful palace was constructed in the 19th century. Intricate artwork can be witnessed outside as well as throughout the interiors of the former palace.

And number one, Djemaa El Fna. It’s the main square of city’s medina, the 11th century historic area that is on the UNESCO World Heritage list. At any given night, it has a grand festival feel.

The Marrakech of today is basking in the glory of yet another heyday. Home to some of the world’s most beautiful gardens, hotels, houses and monuments, resided in by some the world’s most famous designers, writers, artists and entrepreneurs, host to the glamorous International Film festival and recipient of over one-third of all visitors to the country, a figure set to rise in line with vision 2010.

It is a city of noise, entertainment and color that thrives on attention and appears to blossom the busier it gets.

From the snake charmers, storytellers and acrobats of Jemaa el Fna (see below) to the hustling, playful chitchat in the souks, the honking horns on Avenue Mohammed V, the dashing bursts of bougainvillea and the art galleries, exhibitions and boutiques, it is a city where the old and new seamlessly join and you feel as comfortable on the black of a braying mule as you do in the front of a polished 4×4.

It is also a city where in amongst the opulence and affluence, there is severe poverty.

Migrants from the rural Atlas looking for work to feed their families, beggars and street children rifling through dustbins, hustling tourist and conning the naive in order to get a bite to eat or a scattering of loose change

Once recommended by Winston Churchill as having the air to cure bronchitis, it is now one of Morocco’s most polluted cities where every road is a traffic jam and the smell of fumes, overpowering.

Despite this, investment in Marrakech is soaring. The combination of a young, forward thinking monarch and a highly effective regional governor Mohammed Hassad has done much to improve the quality of life in the city.

Social housing projects are underway to get the city’s poorest out of the shantytowns, the bureaucracy, notorious for impeding investment and entreneurialism has been hacked down to manageable sized chunks and touts who harass foreigners are at risk of arrest by heavy-handed tourist police.

The main investors are the French many of whom still feel they have something of a hold over the city and, expatriate Moroccans looking for a project they can sink their hard earned foreign currency into.

The last five years, though, have seen a sharp growth in the number of British people buying property in Marrakech either as second homes, guesthouses or holiday lets. https://spain-info.co.uk/holiday-ideas/holidays-in-morocco/