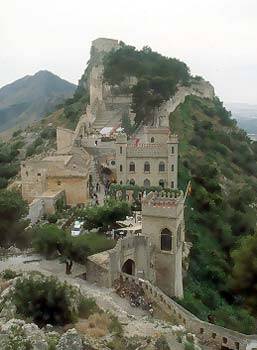 CLICK IN FOR Further Guides and Interesting facts about Costa Blanca

Xativa is in the Valencian region of Spain, it is a town inland from the coast but has lots going on.

For one thing it has a castle, its really worth seeing for the whole family, its not a expensive place to visit and small children are free.

There is plenty to see for your trip to Xativa, it has some beautiful old streets to walk around. Xativa is famous for having two popes who were both born in Xativa they were the famous maybe infamous Borja family.

Nearest Airports to Xativa are

It is a boutique hotel with a swimming pool and sauna. More
Set in an old farm house, the Mont-Sant is surrounded by gardens. The rooms all have free wired internet, a minibar and air conditioning.
The surrounding Valencian countryside is ideal for cycling and hiking.
Mont-Sant is 50 km from the beaches of the Costa Blanca. Free private parking is offered on site.

There is easy access to Valencia by car via the nearby A-7 road.
from Spain-info Rentals.

It has a restaurant and a 24-hour reception. More Each air-conditioned room at Vernisa features a balcony. There is flat-screen satellite TV and a bathroom with free toiletries.

Guests can enjoy a continental breakfast in the Vernisa’s restaurant. Spanish cuisine is offered for dinner. more

Xativa Railway Station is just 300 metres from the hotel. There is easy access to the AP7 Motorway, and Valencia, Gandia and the nearest beaches can be reached in less than an hour by car.
Nearest Airports to Xativa are

It offers a 24-hour reception and stylish rooms with free Wi-Fi and flat-screen TV. More The air-conditioned rooms at La Maga Rooms feature minimalist décor.  Each one has a private bathroom with modern fittings.

Breakfast is served on the terrace, where guests can enjoy views of the old town.

Xativa town centre is just 5 minutes’ walk away from La Maga Rooms. With easy motorway access, the hotel is around 45 minutes’ drive from Valencia.
from spain-info Rentals

It is a converted weaver’s house offering a roof terrace and stylish rooms with free Wi-Fi. More All rooms at the Aldomar feature whitewashed walls and terra cotta floors. They are equipped with air conditioning and heating, and they each have a private bathroom.

Breakfast is served daily in the Casa Aldomar’s bright breakfast room. There is also a variety of good restaurants within 10 minutes’ walk of the hotel.

Casa Aldomar has a library with board games and sofas, and there is also an interior courtyard with tables and chairs where you can sit and relax.

The Castle is a 15-minute walk from the Aldomar. You can reach the city of Valencia in 45 minutes by car.
from spain-info Rentals

is a famous Spanish castle located in the city of Xativa near Valencia.

It is strategically located on the ancient roadway Via Augusta leading from Rome across the Pyrenees and down the Mediterranean coast to Cartagena and Cádiz.

In 1092, the Castle fell into the occupation of the Almoravids Dynasty who were expelled in an uprising that took place in 1145.

During this uprising, the Castle was placed under siege by the Governor of Valencia (Marwan Abd-al-Aziz). In 1171, the Castle finally fell, along with the rest of the Levante coast, into the hands of the Almohades.

King Jaime I of Aragon began his crusade there in the summer of 1239 finally capturing Xátiva on Sunday, 22 May, 1244 following a five month siege.

After submitting to the Christian monarch and signing the Treaty of Jativa the Moors handed over the smaller nearby Castle to Jaime I, while they were allowed to continue occupying the larger castle for another two years based on the terms of the treaty.

After the 2 years had elapsed Jaime I of Aragon repopulated a large part of the town with Catalan and Aragonese settlers.

Xativa is located 55 km south of Valencia in Spain, easily accessible by car or train and nestles at the foot of the Vernisa mountain range.

Today’s city dates mostly from the early 18th century when it was rebuilt following a fire lit on the orders of Spain’s first Borbon king.

The city is dominated by a mountain top castle, has a basilica and several convents, historical churches, noble palaces and is known as the city of a thousand fountains. Xativa also boasts a range of fine restaurants, a theatre and hosts two cultural festivals (in July and August) as well as celebrating the fiestas of “Fallas” in March and Corpus Christi in June.

Within 40 minutes drive of the Mediterranean coast the area is also surrounded by forrested mountains, ideal for rambling.
from spain-info Rentals

Best to e-mail: carol.lanceley1atgmail.com To use email take out the at and insert @ into the email address