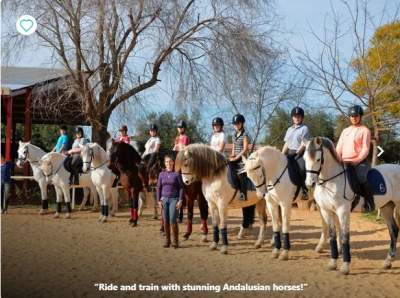 This one-week riding holiday is designed for those who share our passion for horses. The combination of “trail and training” is ideal for riders who believe that trail riding is one of the best ways to have fun, make new friends, and see Spain from another angle.

During your stay, you can relax from the stress of modern-day lifestyles while devoting some time to improving your horse riding skills so that your confidence and enjoyment of horses will increase greatly over the week!

Epona offers a 20% discount for children under twelve to facilitate the participation of families in a common activity but they will request parents to please take full responsibility for their children’s actions with regards to the care of the accommodation and facilities.

A document proving the child’s age will be requested when booking, to benefit from this discount.

The hotel is full of history, charm, and elegance while at the same time, comfortable and modern; and is located only 20 minutes from Sevilla Airport (SVQ), with breathtaking views over the fertile valley, the Vega de Carmona, all the way to the great river Guadalquivir 30 kilometers away, and the Sierra Morena mountain range behind.

The name of the hotel comes from the Moorish term Alcazar, meaning “a fortified palace”, and the Spanish, “reina”, or queen; therefore, it is the queen’s palace.

The building was originally erected by the Moors in the 13th century as a fortress adjunct to the Puerta de Cordoba, in an era when the town was one of the most important caliphates of Andalucia.

After the Moors were pushed back to their last strongholds in Granada and Málaga, in Medieval times, the Christian kings of Castille also favored Carmona to fix their royal residence in the region.

Specifically, King Alfonso XI showed a fondness for the town and while the royal residence in Andalusia was the Royal Alcazar in Sevilla, he housed his favorite concubine, Leonor de Guzman, in the comfortable and impregnable Alcazar de la Puerta de Cordoba.

When he died of the Black Plague in Gibraltar, his only legitimate child, Pedro I inherited the throne but due to the constant disputes for the crown, that he had to suffer from his nine illegitimate half-brothers, he maintained Leonor as a prisoner in the palace until her death. He also favoured Carmona and built the Alcazar del Rey Don Pedro (now the Parador) as his royal residence.

However, as legend has it, during the 15th century, another King of Castile, Juan II, embarking on another war with the Sultans of Malaga and Granada, sought the safest town in the province to house his beloved queen and his heir and keep them nearby. He chose Carmona as the most impregnable town and the Alcazar de la Puerta de Cordoba as the safest and most comfortable residence for his family. From that time on, it became known as the Alcazar de la Reina.

The palace, totally restored in the 1990s in the original Mudejar style and refurbished in 2007, boasts spacious and elegant lounge areas and patios, an outdoor solarium with saltwater swimming pool, and a total of four different options for wining and dining, The Tabanco Restaurant, the Terrace Bar, the Tabanco Tapas Bar, and the official Guinness Irish Pub.