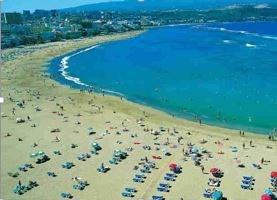 Gran Canaria Vacations on the Canary Islands.  This is one of Spain’s main Winter Destinations particularly popular for longer stays.

San Sebastian Church in Aguimes houses various works of art including paintings and sculptures and is one of the most well maintained structures of worship on the island, having being completed in 1952 (construction began in the late 18th century!), and the designs are based on the Cathedral of Las Palmas. Located not far from the caves of Guayadeque and adjacent to “Barranco de Balos”.

It’s at this barranco (valley) that you can find the sacred Guanche site called “Lomo de los Leteros”. The Basalt slope there is inscribed with pre-hispanic, geometric designs and sketches of human figures.

Enjoy an unforgettable week in this wonderful island, with an unbeatable climate all year round.

The tranquillity of the place, the kindness and hospitality of its people and the wonderful surrounding nature, allow us to offer you what you like the most: a place that invites you to practice yoga and meditation, take walks, or simply dedicate to yourself the time you deserve.

The philosophy is to welcome you into our home as one of the family. In addition, a small group (maximum 7 people) is formed in order to be able to attend you in a personal and close way.

A wide range of activities, specified in the planning, will make your vacation an enriching experience.

Apart from the daily practice of yoga and meditation, you can enjoy nature walks. You can also visit places like Teror and Arucas, emblematic villages of the island, and the capital, Las Palmas de Gran Canaria, with one of the best urban beaches in the world, where you can spend the day doing whatever you want without having to follow a specific program.

In addition, during the week different workshops will show you other aspects related to yoga and your wellbeing. So come, relax and enjoy! MORE

ARUCAS on the Canary Islands

(population 30,000) One of the main places of interest in Arucas is the neo gothic church of San Juan Bautista (St John the Baptist), constructed between 1909 and 1977.

Arucas is also the third largest town on Gran Canaria and has it’s own rum distillery worth a visit (and some sampling!) too. “The Marchess’s Garden” is a 10 minute walk from the church, a botanical garden with a huge collection of both local and tropical plants. If you get to the top of “Arucas Mountain” (an old volcano), you’ll find a traditional Canarian restaurant up there.

ARGUINEGUIN on the Canary Islands

This is one of the most populated areas along the south coast of Gran Canaria. A typical Canarian fishing village, it’s home to many locals rather than being a tourist resort.

Tuesday is market day (the largest on the island). The harbour here hosts a ferry service to Puerto Rico and Mogán whilst another popular way to reach the town from Puerto Rico is by trecking over the mountain between the two towns.

This package is the best option for anyone wanting to make a start in the world of surf.

In this beginner surfing courses, you’ll enjoy the indescribable sensation of riding waves on a surfboard as well as learning the basics of this exciting sport.

The course will take place at the biggest beach in Las Palmas, Las Canteras.

As the first surf holiday company, the surf school offers the best location on the beach, only 15 seconds away from the sand, making sure that you get all the fun!

AGAETE on the Canary Islands

(population 5,600) Agaete is located in the far, north west of the island at the foot of the Tamadaba pine woods, also on the outlet of one of the most beautiful, fertile valleys of the island.

Here they produce lemons, oranges, avocados and coffee whilst Agaete is more famous through the archipelago for its “Fiesta de la Rama”, celebrated during the first week of August annually.

The port of Agaete is very well known for its fish restaurants, the area being a fisherman’s haven.

The port also hosts frequent ferry services to Tenerife, Lanzarote and Fuerteventura. One of the views from the port is “Dedo de Dios” (God’s finger – pictured above) being a spectacular rock formation just a few yards out to sea.

The area around Agaete is one of the most richest and fertile areas of the island.

As well as traditional and tropical fruits are grown alongside the coffee plantations there and the natural mineral water produced in this area is thought to have medicinal properties!

BANDAMA on the Canary Islands

It’s at Bandama that you’ll find the most perfectly formed crater in the Canary Islands, it has a diameter of 1000m and a depth of 220m.

At the bottom of the crater you will see a farm which can only be reached by a steep and narrow path and making it (so I’m told) the only inhabited crater in the world.

With views to the picturesque town of Bandama along with its 18 hole professional golf course, the oldest in Spain (founded 1891), this is very much an area worth a visit.

FIRGAS on the Canary Islands

(population 5,750) Again one of the more picturesque towns of Gran Canaria I have found, Firgas is famed locally for it’s natural mineral water.

Nearby is the “Azuaje Ravine”, the waters of which are believed to have curable properties and many other natural springs in this area have brought about the construction of the islands main bottling plant for mineral water.

GALDAR on the Canary Islands

(population 21,500) Seat of the ancient Guanche rulers and the first capital of Gran Canaria prior to Las Palmas.

The church of Santiago de Los Caballeros another stop-off point here, known for its 4700 pipe organ and the green font where, tradition has it, the Aborigines were baptized.

It also houses one of the best collections of art on the island, both of paintings and sculptures.

Also worth a visit if your in the Galdar area is “Reptilia Park” located on the outskirts of town heading towards Agaete. Reptile park with the largest lizard in captivity and several species of (cute) monkeys too.

Recently re-opened are the “painted caves”, an historical site of pre-historic caves which are both preserved and restored for display to the public.

(population 12,500) Birth place of the famous painter Lujan Perez, Guia is better known for the “Casa Quintana”, built in the 16th century.

It’s also famous for its cheese and Canarian Knives. On the outskirts of the town you’ll find “Cenobio de Valerón”, an area of 300 or so caves once inhabited by the aboriginals. Many of their original tools, utensils and so on are to be found there on display.

Close by is “EL Gallego”, an area of caves where the aboriginals conducted their funerals from Spanish Holidays Canary Islands Gran Canaria Vacations

INGENIO on the Canary Islands

(population 21,500) “Ingenio de azucar” means sugar refinery and it was here that a sugar refinery was built when the Spanish first colonized the island. Ingenio also has a museum to visit showing how crafts have developed over the centuries.

You can see the “openwork skill” that has been kept alive for centuries and is still to be displayed here. The “Sequero” district and its buildings date back to the 15th century.

Not to be missed if you’re here mid October is their festival of the billy goat (second Saturday of October) in which the whole town participates in finding the best goat and parading it around town all afternoon whilst feasting on huge amounts of food and drink! Also, close by are the caves of Guayadeque