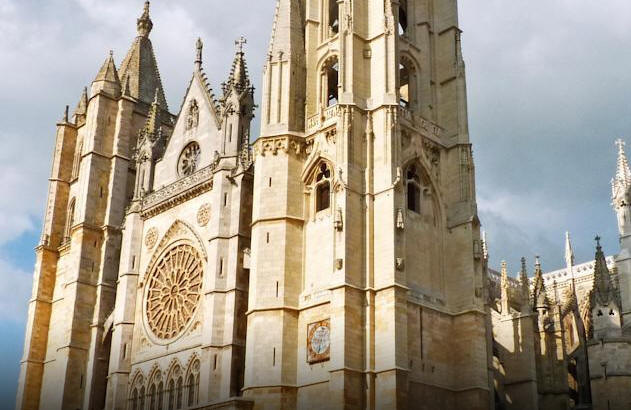 Formerly the capital of the medieval kingdom of the same name, it was united with Castilla in the 13th century.

The city’s most famous monument is its great 13th-century Gothic cathedral known for its stained-glass and rose windows.

Also important to visit is the Romanesque Church of San Isidoro with the pantheon of monarchs from Castilla y Leon.

One of Antoni Gaudi’s more conservative buildings is in Leon, Casa de Botines.

The San Marcos monastery is a good example of the Renaissance period. On the outskirts of Leonare the Roman gold mines, Las Medulas.

Housed in a former monastery, built in the 16th century, Parador de Leon is a stunning hotel that has kept its original, luxurious interior decor, and impressive architecture. More…
The Facade of the Paradore is awe inspiring, all of the public rooms are luxurious, there is an air of grandeur throughout, it is a treat to stay here. The bedrooms in the new wing are spacious, well equipped and each have there own balcony. The buffet breakfast has a vast array of choice for all tastes and the main Restaurant is excellent for lunch or dinner. Stayed two nights would have liked to stay longer!… More

The San Marcos Monastery, whose construction began in the 16th century, replaced another 12th century monastery from the times of King Alfonso VI.

Different artists immortalised a yesterday where the strength of his legacy can be seen in stone and wood, making the hotel a living museum.

The past emerges in the Cloister and Chapterhouse embracing the present with a learned renovation of large rooms.

In days gone by these sheltered pilgrims.

There are suites located in the original building with views of the square and also an annex constructed in the 20th century where the majority of the accommodation is housed.

Regal halls, spacious rooms, a library and a restaurant which in the main part offers an impeccable traditional gastronomy with touches of signature cuisine; all of which makes the Parador de San Marcos a unique establishment on St. James’s Way and the Silver Way.

Take a tour of Las Médulas in Leon, Spain — part of the World’s Greatest Attractions travel video series by GeoBeats.
Large, jagged, red rocks jut up through the green carpeting of the hills in the province of Leon, Spain.
These formations, appearing like the shattered foundations of some monumental ruin of a building, mark the site of Las Medulas.

This amazing part of the world was once an important part of the Romans’ gold mining operations.
The method that the Romans used to extract the gold was remarkable; they actually carved through the mountains with water.
By diverting water channels and using massive aqueducts, they forcibly eroded the stone, exposing veins of gold, and then harvested the gold from the water.
The wonder of Las Medulas comes from the rugged beauty of the land, combined with the awe of Roman ingenuity and powerhttps://spain-info.co.uk/castila-and-leon/