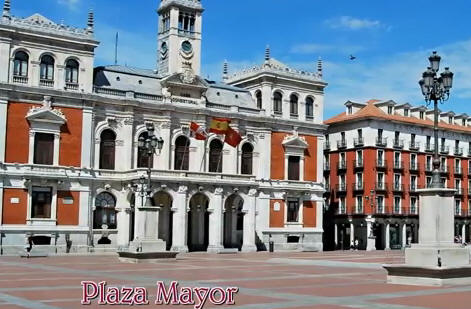 Valladolid The city lies along the Pisuerga River at its confluence with the Esgueva, southwest of Burgos.

Valladolid
Valladolid is the capital of the Autonomous Community of Castila and Leon. The region is surrounded by castles and vineyards. The Duero River, a region well known for wine production, runs through the region.

The “Rivers of Light” Valladolid (English)

The “Rivers of Light” walk crosses through and connects different areas of the centre of Valladolid.

The actions carried out in the areas has consisted of organizing and harmonizing the environment, unifying the colour temperature of the different light sources used, reducing light levels and enhancing the modelling of the architectural volumes to achieve new visual sceneries.

The installer company ELPA, from Valladolid, and the manufacturers INDAL and PHILIPS, have carried out the project which has opted for the use of the latest LED technology in architectural lighting with optimum energy efficiency.

Housed in a former palace, dating from the 16th century, this elegant, classical-style hotel is situated in Valladolid city centre, in the Castilla y León region of northern Spain.

More…
Zenit Imperial Hotel is set in the heart of the city, next to the town hall and the Plaza Mayor.

From here you can stroll around the centre of this historical capital of Castile-León and see monuments such as the Cathedral.

In the evening, you can explore the lively nightlife of the city centre, with its numerous tapas bars, restaurants and nightclubs.
There is a smart restaurant onsite, which allows you to enjoy traditional Castilian cuisine without leaving the hotel.
This is our guests’ favourite part of Valladolid, according to independent reviews.
Couples particularly like the location — they rated it 9.7 for a two-person trip.

Much history has taken place in Valladolid.

In 1469, Ferdinand I of Aragon and Isabella of Castilla were married at Vivero Palace. Valladolid flourished during the Golden Age.

It was the capital of the kingdom and a major center of trade, crafts and government.

The Consejo de Indias (Council of the Indies) was seated in Valladolid and in 1506, Christopher Columbus died in the city.

The son of Carlos V, Felipe II, was born in Valladolid in 1527. During the 17th and 18th centuries the glory of the town declined.

A tour of the city will feature the home of Miguel de Cervantes. Prominent architecture reflects the splendor of its past from Romanesque towers, to mudejar portals, and renaissance monasteries.

The late-gothic facade of the Church of San Pablo is breathtaking. Holy Week is a major event to witness while in Valladolid.https://spain-info.co.uk/castila-and-leon/

Are you planning a short trip to Valladolid?

Do you want to have everything within arm’s reach?

This “Mini Survival Guide” is all you’ll ever need to have in your backpack:

Handy general info, all the places of interest neatly organized by category, a phrasebook to quickly look up useful words and phrases and a beautiful full-color city map to find your way around.