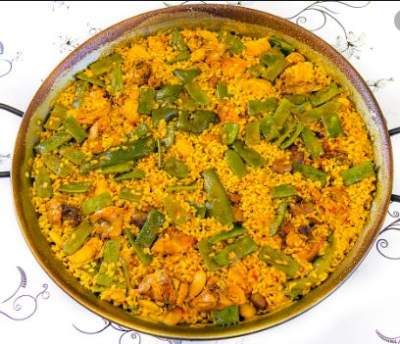 Vegetable Paella  When preparing Vegetable paella Wash vegetables in plenty of water peel and cut them if necessary the red pepper into strips and the remaining peppers into triangles Other Vegetable Paella recipes Remove the tips of the beans, cut the mushrooms into slices and remove the peas from the pod. Cut the garlic and onion in brunoise.

Here’s one way to make the Vegetable Paella, Spain’s most popular culinary export.

The internationally-known Vegetable Paella is a rice dish from Spain.

Originating in the fields of Valencia in eastern Spain, today Vegetable Paella is made in every region of the country, using just about any kind of ingredient that goes well with rice.

There are as many versions of Paella as there are cooks. It may contain chicken, pork, shellfish, fish, eel, squid, beans, peas, artichokes or peppers.

Saffron, the spice that also turns the rice a wonderful golden colour, is an essential part of the dish.

Wash vegetables in plenty of water, peel and cut them if necessary — the red pepper into strips, and the remaining peppers into triangles.

Remove the tips of the beans, cut the mushrooms into slices and remove the peas from the pod.

Cut the garlic and onion in brunoise (julienned and diced, given 2 mm).

Heat oil in a pan and sauté the onion until transparent. Add all vegetables except the garlic, and sauté for 15 minutes.

Add the wine, mix well with vegetables, allow alcohol to evaporate for five minutes and add the rice, stirring constantly, until it begins to be transparent.

Crush the garlic with the saffron diluted with some water and add to the previous preparation.

Pour vegetable stock over the rice and vegetables, add salt, and cook for 20 minutes or until rice is tender.

Leave the Vegetable Paella a few minutes before serving.

Chef Nuria hails from Spain and has been cooking there for over 10 years.

Her flavours are inspired by the hedonistic Spanish sub cultures of the Basque, Catalonia and Valencia; these pallettes cater to the experimental gourmand.

Nuria has cooked at a variety of restaurants that covers a range of the region’s national specialties.

Prior to coming to Olive Beach, she was the head chef of two restaurants simultaneously.

She is the resident chef at Olive Beach.

Cooking holidays in Spain, for all food loversDo you love Spanish cuisine so much that you want to learn how to cook it?