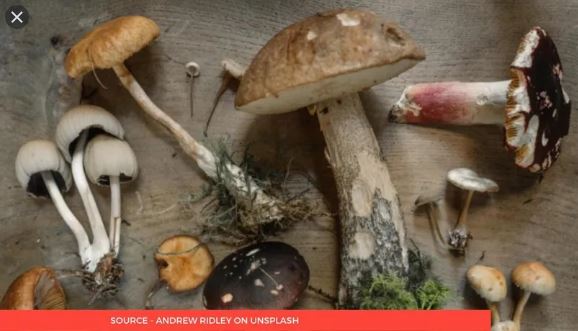 Searching for and Collecting edible wild mushrooms in Spain

Collecting wild mushrooms and cooking them In Spain, autumn and spring are the best times to collect them. Spanish eat and collect lots of mushroom at this time of the year You will to stay Safe Need Reference Books

Join us on an EPIC Mushroom Hunting Adventure with Alfredo​ in Galicia, Spain where we learn how to find and identify chanterelles and red pine mushrooms.

From the forest to the dinner plate, Galicia continues to prove itself as a Magnificent Culinary Treasure!!

Thank you Alfredo, Xoel​, Maria​, Uxia​, and Tamara​ for treating us like family and showing us your beautiful Galician culture

Join us on an EPIC Mushroom Hunting Adventure with Alfredo​ in Galicia, Spain where we learn how to find and identify chanterelles and red pine mushrooms.

From the forest to the dinner plate, Galicia continues to prove itself as a Magnificent Culinary Treasure!!

Thank you Alfredo, Xoel​, Maria​, Uxia​, and Tamara​ for treating us like family and showing us your beautiful Galician culture

The boys join local Foodie tour group Aborigens to go mushroom hunting early in the morning in Mountains outside of Barcelona.

Will they find some? Will they try some? Or Will they die!!??

They also get to see first hand, a mushroom feast prepared by the world’s authority on mushroom cooking, aptly named the mushroom king!

Eating seasonally has a different meaning when tradition dictates your dietary calendar.

In Spain, fall and spring mean lots of mushroom eating, and often hunting, as well.
In this video, faircompanies’ Nicolás Boullosa goes looking for fungi with his cousins near the Portuguese border in Cambroncino (Extremadura), Spain.

While the mushrooms were scarce, there were plenty of chestnuts: a staple food, historically, for many Europeans (season: October- December).

Richard Calvin invited me to go mushroom foraging for the first time with his friend Joan in Girona, a region in Costa Brava Spain.

As it was early in mushroom season we drove up to the top of a mountain where it was cold, and hopefully damp enough to forage mushrooms.

I have never foraged anything, including mushrooms but I do know you have to be careful.

I watched as Richard and Calvin began to pick orange mushrooms and as I didn’t know which ones were good and which mushrooms were not I simply picked whatever I saw.

It must be my North American ways because I always picked the white mushrooms and none of them were edible.

It turns out that at this time of year orange mushrooms were the best bet and sometimes the beautiful purple mushrooms.

I learned so much from Richard and Calvin and I realized that mushroom foraging or any kind for that matter, could be really addictive.

But you must have someone with you that knows what they are doing or at least has a good field book.

It is funny in Costa Brava everyone goes mushroom foraging and they say that people take the location of their “spot” to their death bed, and only then will a father tell a son where to get the best mushrooms.

You would think this was a joke but people were quite serious about it. In fact I wondered if the only reason Richard and Joan were so open to allowing me participate because I was only there for a short period of time and had no idea where I was so I could not share the location of one of their spots for Collecting wild mushrooms.

A few times Joan told me that he thought a mushroom smelled good, and was probably good, but that he did not recognize it and so we should throw it back.

While it’s rare for people to die from eating a bad mushroom, you can certainly have an unpleasant day or find yourself ill from taking a risk. I will definitely buy a field guide the next time I go foraging as I simply don’t have the nose that he does.

This is the most comprehensive guide to foraging for wild mushrooms in UK and Northern Europe for both beginners and experienced foragers.

With a special pictorial index, it describes the best tasting fungi, where to find them and when they are at their best; how to distinguish between the edible species and the poisonous lookalikes and when to leave an edible mushroom alone so the species can survive.