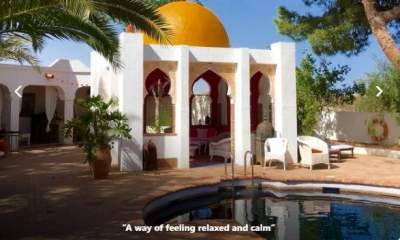 Join Unlocked for a magical six-day journey in La Finca Paradiso retreat center, standing amidst 33 acres of fruitful Spanish gardens and enjoying a 360-degree view of the Sierra Cabrera Mountains and the Mediterranean Sea.

Gift yourself the opportunity to restore, cleanse, and flourish is this luxury eco-retreat center.

You will deepen your practice of yoga, meditation, breathe, movement, creativity, and mind – body – spirit connection.

The Mindful Luxury Retreat aims to help you improve your technique and skill and give you the tools that are needed to keep informing you long after the retreat has ended.

We want you to feel that you have learned and practiced in a creatively nurturing environment and you have gained in confidence and ability, therefore, we limit the number of participants to ensure one to one modifications and encouragement with over 20 hours of professional tuition.

Please contact us for guidance and help at every stage of booking and participation.

A Visit to Fort Bravo Hollywood Film Studios in Southern Spain, some of Sergio Leone’s Spaghetti Westerns were shot there in the 1960’s
Have you ever lived in the Old West?

Fort bravo, in the Tabernas Desert of Almeria is packed full of fun for all the family.

If you’ve ever wanted to see where they made the famed Spaghetti westerns in the 1960s and 1970s, Fort Bravo offers an entire town to take you back in time.

Activities include horseback riding and wooden cabins for staying the night. An alternative if you’re looking for things to do with kids in Andalusia.

We went there before it was fully open for the season, had to pay full price but the gift/ costume shop was not open and there was no wild west show the actors were going through their routines in the bar, we were given one free beer but the canteen was not open for food.

I was given a pony and trap ride around the set. I would have thought that one Day would be enough. there was no accommodation ‘on site’ but there are hotels a short drive away.

We stayed in the seaside town of Almeria which is about a 20min drive.

I can not give you much more information as I said it was only partially open and we were the only guests there, but I understand that you get a chance to dress up and take part in the ‘Wild West’ show.

There are horses there but not sure if they offer horse rides to the public. We really enjoyed the visit though.

The streets of Almeria, Spain.

Almería is the capital of the province of Almería, Spain.

It is located in south-eastern Spain on the Mediterranean Sea.

This video features views around the streets of Alemria including the buildings, roads, churches, shops, bar, restaurants and sea-front promenade that has a number of fountains and water features along it.

The video also features the rail link and bridge that goes to the port and an old shunting locomotive outside of the port.

Drunken Goat cheese so called because it takes a bath in some red wine for a couple of days while being produced.