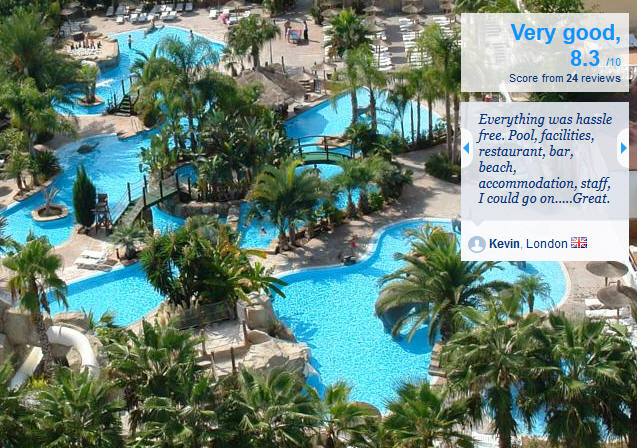 This is the link to the Spanish Campsite Guide

Situated in the town of Benidorm, Camping Arena Blanca offers a café-bar and an outdoor swimming pool, covered and heated in winter. . More Surrounded by trees, all bungalows at the Arena Blanca Campsite offer a free parking space. They have a kitchenette with a fridge and coffee maker.

Arena Blanca has an on-site supermarket and a café bar. Staff at the reception can arrange car rental and provide information about the Costa Blanca region

Set in the beautiful Costa Blanca, Camping El Jardín is located 500 metres from the beach and 8 km from Alicante.

They all have a private bathroom, a seating area, a TV and a kitchenette including a microwave, gas hob and coffee maker.

The bungalows at Armanello come with air conditioning and.heating. Each one has a porch, satellite TV and a kitchenette with a microwave and coffee-maker.

The campsite’s restaurant serves international dishes. There is also a poolside café-bar and an on-site supermarket. You can walk to Benidorm’s Levante Beach in around 25 minutes

.. There are 2 people looking at this campsite. More

Bungalows Los Llanos in Denia are located 200 metres from the beach.

Free parking is available and there is a seasonal outdoor swimming pool. There is 1 person looking at this campsite. More

Camping Moraira is a 5-minute walk from the beach in Moreira, 11 km from Calpe.

It offers an outdoor pool with underwater viewing windows and bungalows with satellite TV. More

This camping ground is just 100 metres from Playa Muchavista Beach.

It features air-conditioned bungalows with a terrace and private bathroom. Free Wi-Fi is available throughout. More

Latest booking: yesterday. from spain-info campsites
Come and choose a Campsite on the Costa Blanca, ‘white coast’ in Spanish, are a guarantee of a fantastic holiday. But there are numerous other activities to enjoy around the campsite‘s.
The Costa Blanca boasts breathtaking areas of natural beauty, cities brimming with culture and delightful theme parks. With a realy pleasantly mild climate during the winter, this enthralling region is perfect for camping the whole year round.

Being part of the province of Alicanté, Costa Blanca, also known as ‘the White Coast’, is home to some of the cleanest beaches consisting of pure white sand.

The Costa Blanca is a huge hit with British and German tourists as it is home to two of the biggest tourist traps which Spain has to offer: Benidorm and Alicanté.

If you are after a bit of retail therapy from your holiday then the Costa Blanca is the place for you.

One of the huge advantages of having two of the biggest tourist cities in Spain in the same region is that everything you could need is available, from tourist shops to ones selling local goods.

The Costa Blanca is all about the nightlife and entertainment, again with Benidorm being one of the biggest and most famous destinations to visit in mainland Spain.