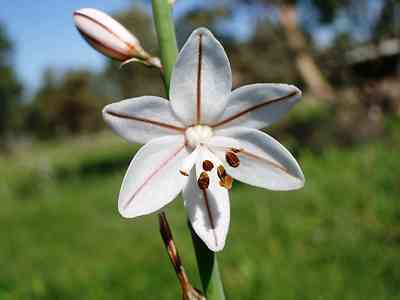 There is an abundance of colourful wild flowers everywhere here in Spain  along the roads in the campo and of course in the woods . Selection of Spanish Gardening guides for you.

These are a selected few of some of the “usual suspects” I meet every day at the moment when walking the dogs or driving through the campo:

It is a species of morning glory known by the common name Mallow Bindweed.

It is a plant with delicate, silver green leaves that will either climber or trail.

It blooms with large, funnel shaped, pink flowers from spring to late summer. It is beautiful in the garden, but can be invasive and is best grown in a container.

Asphodelus fistulosis, also called Onion Weed. Originating in Western Europe, this plant has escaped from gardens to become a troublesome weed in agriculture and is a declared weed in many parts of the world.

It is all over the pinewoods, but weed or not – the star-shaped delicate flowers are exquisite.

Cooking holidays in Spain, for all food lovers
Do you love Spanish cuisine so much that you want to learn how to cook it?
Then, there is no better way to learn than to go on a local cooking holiday in Spain.
Select the destination of your choice and let some of the best Spanish chefs out there introduce you to creating some of the most delicious Spanish dishes.
Reserve yourself a spot on one of our many cooking vacations in Spain and become the culinary master you know you can be!

They are attractive, blooming with bright yellow flowers for many, many months, but are a nuisance when they spread into gardens or when they infest shrubs.

Although buttercup oxalis does not produce seeds, it is difficult to control because it propagates through underground bulbs.

Pulling up the stems leaves the bulbs behind. Sometimes Bermuda buttercup is grown as an ornamental.
Oxalis pes-caprae.

Field Guide to the Wild Flowers of the Western Mediterranean.

“Field Guide to the Wild Flowers of the Western Mediterranean is the most comprehensive and up-to-date plant identification guide to the area.

The western Mediterranean is one of the most important regions in the world for its outstanding biodiversity, boasting over 10,000 plant species.

The area encompasses southern Europe from the Portuguese Algarve in the west to Italy in the east, the islands (including the Balearic Islands, Corsica and Sardinia), and North Africa from Morocco in the west to Tunisia in the east.

Covering over 5,000 species, this easy to use guide focuses on the most common and conspicuous species that occur in the area, with plant descriptions, colour photographs and illustrations throughout.

It is particularly resistant to harsh coastal climatic conditions and to salt and is a robust and fast growing, creeping, mat-forming succulent that grow year round, with individual shoot segments growing more than 1 m per year.

You find it all over the sand dunes and in the pine woods. The large, pink flowers are very showy and the plant is frequently cultivated, especially in mild coastal climates.

It is an easy-to-grow groundcover, ideal for low-maintenance and water-wise gardens. Flowering occurs mainly in spring and early summer.

Echium sabulicola, also called Sand Viper’s-bugloss, is a creeping plant native to the sandy areas of the coasts of the Mediterranean region.

It requires plenty of sun and prolonged dry periods. The plant blooms from early spring to summer, usually with blue to purple flowers, but can also be found with reddish/pink hues.

It lives in grassland and woods together with many other species considered weeds.
Echium sabulicola,
Erodium malacoides

Erodium malacoides is a species of flowering plant in the geranium family known by the common names Mediterranean stork’s bill and Oval heron’s bill.

This is a weedy annual or biennial herb which is native to much of Eurasia and North Africa, but can be found on most continents where it is an introduced species.

It spreads very easily – the seeds often being carried in the fur of animals. I just love these tiny pink flowers.

Anagallis monelli (Blue Pimpernel or Flaxleaf Pimpernel) is a species of pimpernel native to the Mediterranean region.

It is a low-growing tender perennial of the primrose family with deep blue flowers and blooms from spring to late autumn.
Anagallis monelli
Helichrysum stoechas, also called Eternal Flower or Goldilocks

Helichrysum stoechas, also called Eternal Flower or Goldilocks. This is a plant of dry stony places mostly found in the eastern Mediterranean. Many flowers of Helichrysum species look quite like this one – yellow and dry (everlasting) looking.

This plant can be identified by a strong smell of curry when the leaves or stems are crushed. It flowers for several months.

These plants all look great, but in the garden remember to control them as most of them are quite invasive. Unless of course, your goal is a natural garden full of wild flowers.

The good thing however, is that they require no care or weeding as they are basically weeds themselves…

There is an abundance of colourful wild flowers everywhere here in Spain – along the roads, in the campo, and of course in the woods.

Alicante Yoga Online into your home