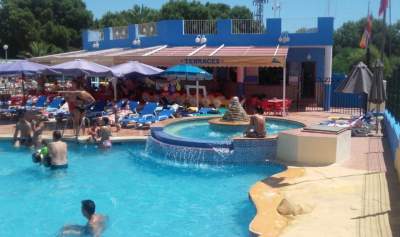 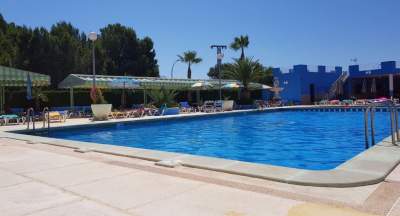 Aqua Parks Spain Come have Fun in the Sunshine

Hillside Carvery starts at 1.00 come and relax and enjoy one of the most popular Sunday afternoon venues on La Marina. Bookings not always needed but if you wish to be certain just Ring us on 96-679-7673.

Climbing frames can be used all day up to dusk ie: whilst it’s still light and under parent supervision at night if the parents are with them.

Hillside Aquapark La Marina:
No matter what time of the year or what time of the day An enjoyable day out for all of the family can be had by a visit to the “Hillside Aquapark“, a mini aqua park with water fountains, children play floats, Jacuzzi and two large swimming pools provide a fun day for all. A pool side bar / restaurant offers a great selection from a traditional sandwich to a three course meal (daily specials). A snooker hall in the main complex offers night time entertainment.

There are League matches on every Monday and Friday evenings at Hillside Sports Centre. The Snooker Room boasts 3 Full Size snooker/billiard tables, plus a Pool Table. For those interested in darts, there are two dart boards in the main hall.

Rather nice generous buffet was served served from 8pm with the entertainment began at 9pm. This is Johnny singing the Big Bopper number Chantilly Lace.

La Marina comprises of two separate areas with the village, around 600 metres from the sea and the urbanisation where the majority of the newer properties are built about a mile inland. La Marine village has retained its Spanish feel, whilst down on the beach there is plenty of free parking just behind the famous sand dunes and pine forests at La Marina beach and also at El Pinet. They are both blue flag beaches andhave all the amenities to hand along with a restaurant

by each car parkand a beach bar at the La Marina beach. Alternatively there is a restaurant just behind the La Marina beach called La Pinada that specialises in fish and grilled meats, but also serves snacks and drinks both inside and on its terrace.

There is an abundant supply of bars and restaurants to suit every taste and pocket on La Marina Urbanisation, as well as supermarkets to supply all your needs for a stay here. There are also a number of excellent Indian and Chinese restaurants with take away facilities, ideal for a lazy night in with a good movie or curry by moonlight on a roof top solarium.

There is an abundance of wildlife close at hand with the Salinas de Santa Pola having one of the largest flocks of flamingos in Spain and the famous El Hondo nature reserve close by.
With mountains inland and salt lakes to either side the area has its own microclimate with little rain. The World Health Organisation recognises it as the healthiest place to live and stay in Europe.

No doubt, this fact played a part in La Marina recently being listed in the top 10 best emigration destinations by “Homes Overseas” magazine (July 2006 edition).

The Costa Blanca coastline is world famous for its excellent beaches and golfing facilities. However, there is so much more to do than just bask in the sunshine. This part of Spain has been occupied by many different peoples over the centuries, each leaving their own historical influences on the area. As a result, the region is home to some stunning cultural landmarks: castles overlooking the sea; ancient villages; impressive cities, all built and added to by many conquering races. There is also some stunning countryside, including the largest palm grove in Europe at nearby Elche.

Mediterranean port where developments for the circuit are well under way.

Costa Blanca Golf
There are several golf courses in the area although closest to the villa is the La Marquesa Golf Course of Ciudad Quesada, which is around 10 minutes drive away. Its wide fairways with large channels, lakes and obstacles will be to the taste of most players. It is an extremely comfortable course to play on and you will need to use all the clubs in your bag.

A little further on is El Plantio Golf Course, which is an unspoilt area of Elche. It is both interesting and fun to play on, being a filled with trees and 3 large lakes with a great variation of greens. It is planned to be much larger in the near future.

La Marina is especially well located at the mid point of the golfing mecca that is the Costa Blanca North & South. Here, you will find easy access to the local courses, with an even greater choice being available via the nearby motorway network.