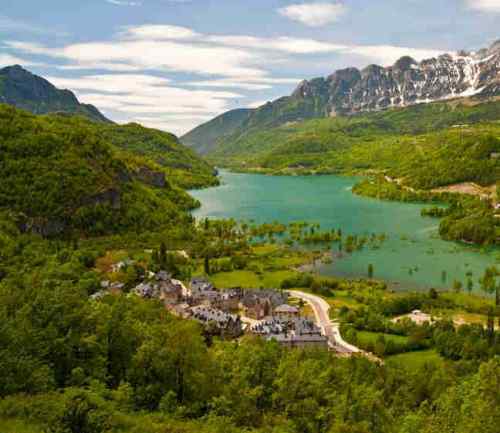 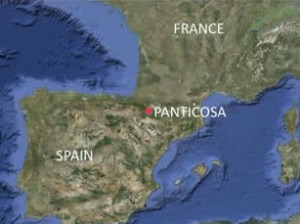 Balneario de Panticosa in Aragon in the Province of Huesca.

Panticosa is a municipality located in the province of Huesca, Aragon, Spain.

This is a most unique enclave situated about 8km from the village. It is at 1,636metres above sea level and was formed by glaciers which carved a bowl shaped valley with a shallow lake in the centre.

The valley is surrounded almost completely by 3000 metre peaks including, the Garmo Negro, Argualas, Pondiellos, Serrato, Batanes, Bacías and Brazato. In addition the mountains are dotted with a multitude of corries (natural lakes) called “ibones” in the Pyrenees.

Panticosa spa achieved acclaim in the heyday of the 19th century when visitors, many of whom from Spanish aristocracy, travelled long distances from the cities to drink from the springs and bathe in the thermal water which gushes out from the bedrock at 60º C.

We can in fact trace the history of the Balneario back to roman times making it a truly timeless experience.

Panticosa is a charming village on the course of the Caldares river, with traditional large houses made of stone, which line steep, narrow streets. It also has a Romanesque church from the 13th century.

Surrounded by beautiful and majestic mountains, dotted by lakes, and peaks higher than 3000 m, this town is the ideal place for mountain sports.

The town of Panticosa is famous for its spa, which still has its old luxury hotels, promenades and casinos, and used to be the holiday destination of the royal family.

It is also known for its winter resort, with pistes that can be accessed from a wide esplanade by the riverbank, from which the bottom chair lift departs. During the summer, we can ride that same chair lift to the lakes of Asnos and Sabocos.

Panticosa is a municipality located in the province of Huesca, Aragon, Spain.

During the late 19th century and early 20th century, it was a successful spa town, famous for its pure mountain waters, that supposedly cured from liver diseases and herpes. Its belle-epoque spa buildings are accordingly well kept and still in use. A well used spa.

Famous for its hot springs which were greatly appreciated by the Romans, Fortuna is fast becoming popular once again as the town becomes an important centre for hydrotherapy, beauty treatments and other therapies associated with the natural hot mineral water baths.

You should never travel without a good local map, just in case of difficult situations.

SPORT Does the subject of Sporting activities Interest you? If so do come over have a look Add the Odd Comment Or maybe ADD things in this vein to the group site Sporting + Adventures  and Just Fun Time https://www.facebook.com/groups/Campoamorplayers/