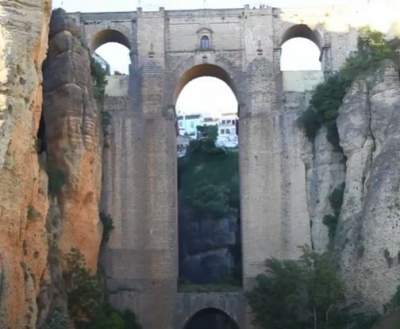 Ronda Valley The municipal district of Ronda is an authentic fort guarded by sierras with hardly any entrances, and the existent ones for traffic are situated at over 1.000 metres altitude.

Ronda is one of Spain’s oldest towns. Julius Caesar saw the original settlement’s worth way back in the fourth century AD and declared it a city.

The town has since passed through many hands, including the Visigoths and the Arabs.

The best of Ronda, Andalusia

Ronda sits in the heart of the Serrania de Ronda, about 100kms from the city of Malaga and it has a population of approximately 35,000 inhabitants.

Surrounded by lush river valleys and sitting above a deep ravine, it is a place that literally takes your breath away when seeing it.

Explore its winding streets and discover why this town has to be on your bucket list!

This is a Preferred property.

They provide excellent service, a great value and have brilliant reviews from Booking.com guests.

They pay Booking.com a bit more to be in this programme. Ronda – Show on map (850 m from centre)This restored traditional Andalusian house is set in a quiet part of Ronda’s Old Town, 5 minutes’ walk from the famous gorge.

The municipal district of Ronda is an authentic fort guarded by sierras with hardly any entrances, and the existent ones for traffic are situated at over 1.000 metres altitude.

These authentic natural walls surround the Ronda depression with horizons in which the greatness of the rocky places (which rule the land from Oreganal to Los Merinos and Líbar to Las Nieves) bring a singular beauty to the landscape.

Inside this mountain range the territory is very different.

The softness of the relief extends from the urban plateau of Ronda until the pasture lands of the north, passing by the bottom of the horticultural and cereal valley, which ascend from Indiana to Guadalcobacín up to the neighbouring lands of Arriate.

Further away from the depression, the relief continues to be smooth in the cereal fields of Montecorto and Villalones. Free Wi-Fi and a seasonal pool feature in this impressive hotel. In high demand! Booked 33 times in the last 24 hours Latest booking: 1 hour ago

The scenic importance of the municipal district of Ronda is reflected in the large extension of territory which the Special Plan for the Protection of the Physical Environment in Málaga has included in its Catalogue.

As well as the lands included in the Natural Park of the Sierra de las Nieves, which this Plan protects as an Exceptional Natural Park, practically the whole of the eastern third part of the municipality is protected by various highland complexes of Environmental Interest.

A protection figure which also appears in the central third, in spaces such as the sierra de Sanguijuela-Salinas and the Sijuela valley and has its most western presence in the Tajo de Lagarín, in the limits with the province of Cadiz.

But if we had to chose any area of special scenic interest, they would be: the Cañada del Cuerno, in the Sierra de las Nieves; the Tajo de Ronda and Caldera, contempalted from the chapel of the Virgen de la Cabeza; the Garganta del Arroyo del Cupil, where the road to Seville crosses; the cork-oak forest of Bogas Bajas

(which has the inconvenience of being a fenced private property) and the ravine of the Sijuel valley (the access is a dirt track with narrow stretches).

The exceptional ecological conditions of the municipal district of Ronda makes one suppose that man’s presence in these lands, in prehistoric times, must have been very important, as proven by the numerous archaeological findings in its lands and the nearby surroundings.

The most outstanding is the Pileta cave (in the nearby municipality of Benaoján) and the important number of dolmens found in Ronda and nearby.

In the Archaeological Museum of Malaga there are various examples found in Ronda and belonging to the Bronze Age.

The first nuclei in the district seem to be joined to the presence of the Celts, who would be followed centuries later by the Tartesides, Iberians, and other settlers.

Many of these settlements were taken advantage of by the Romans, some of them reaching great importance during the Empire.

Such is the case with Acinipo, to which Vespasiano granted the Latin right, at the same level as towns such as Cordoba and Seville.

This city, which conserves the ruins of its theatre a few kilometres away from Ronda, on the road to Setenil, was destroyed in the 5th century by the Vandals.

With the arrival of the Arabs, Ronda regained its lost importance, but this time on its new site next to the Tajo del Guadalevín.

First with the caliphate and later with the Taifas kingdoms, as the capital of one of them, was one of the most important places in Andalucía from a military, political, and cultural point of view, until it fell in the hands of the Almoravides in the mid 12th century.

It would be in 1485 that it fell in the hands of the Christians in the middle of the great offensive of Fernando el Católico to end with the Muslim rule in the lands which today form the province of Malaga.

After the population crisis which followed the reconquest and the Moorish rebellion, during the end of the 17th and 18th century, Ronda reached a peak which provoked the growth of the city further from the Guadalevín river’s gorge.

At the end of the 18th century, the Puente Nuevo (new bridge) was built to join the old city with the new suburbs.

During the War of Independence, Ronda was one of the most distinguished city’s against the war with the French.

It took two years to reduce it and after that, various organised parties continued to harass the invader from the nearby sierras.

This guerrilla resistance gave way to one of the most famous and legendary bandit focuses in Spain in the 19th century.https://spain-info.co.uk/andalusia/