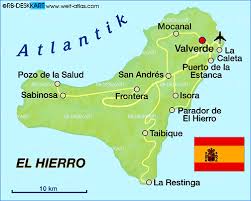 El Hierro Island Cottages and various other Accommodation to Rent on El Hierro Island.on the Canary Islands in Spain. amazing landscapes and clear signs of its violent volcanic past.

Being the smallest inhabited island of the Canary Island archipelago off the West coast of North Africa, El Hierro does not disappoint when it comes to splendid vistas, amazing landscapes and clear signs of its violent volcanic past.

Even right now in 2016 there have been plenty earthquakes due to ongoing subterranean volcanism. Living on El Hierro is not for the faint-hearted!

El Hierro’s western end was for a long time considered the end of the known world by the Europeans.

It is the smallest and furthest south and west of the Canary Islands, in the Atlantic Ocean off the coast of Africa. It is situated at 27°45′ north, 18°00′ west.

The name of the island is derived from the Guanche language toponym Hero, which by the process of folk-etymology was transformed into “Hierro,” meaning “iron” in Spanish, due to its similarity to that word.

Thus, Ferro (Latin ferrum, “iron”) was and is used as an alternative name for the island.

Most likely “hero” is the original name of what we to-day call a “cistern”, due to the way the bimbaches saved water from trees.

It is the name for the island in other languages, including French, German, and Danish.

Pliny the Elder, who used Juba II as his source, names a series of Canary Islands, and it is believed that his Capraria may have been Hierro.

The ancient natives of the island, called bimbaches, were conquered by Jean de Béthencourt -more through the process of negotiation than by military action.

Béthencourt had as his ally and negotiator Augeron, brother of the island’s native monarch.

In return for control over the island, Béthencourt promised to respect the liberty of the natives, but he eventually broke his promise, selling many of the bimbaches into slavery.

Many Frenchmen and Galicians subsequently settled on the island. There was a revolt of the natives against the harsh treatment of the governor Lázaro Vizcaíno, but it was suppressed.

Cottages and various other Accommodation to Rent on El Hierro Island.on the Canary Islands in Spain.